Top notch NCAP results, but BMW makes you pay extra for some of the best tech

The latest BMW X3 was awarded a top five-star rating when it was independently crash-tested by Euro NCAP. Adult occupant safety of 93 per cent was one of the more impressive results, and the 84 per cent awarded for child occupant safety is pretty good too.

Aside from its solid structural integrity and a full complement of airbags, there’s a great deal of latest generation safety tech available on the BMW X3. Disappointingly though, the company charges extra for many features such as active cruise control, lane departure assistance and cross traffic alerts. It’s all part of the BMW Personal CoPilot collection, which also includes autonomous emergency braking as part of the standard spec list. Other safety options include a ‘wrong way’ warning that tells you if you’re about to enter a one-way street from the wrong end. All impressive stuff, but we’d like to see BMW being a little more generous on what is already a pretty expensive car. 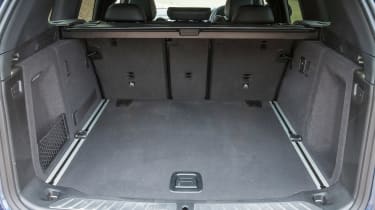 BMW has done pretty well on the reliability front recently in recent years, scoring a welcome ninth place overall in the 2017 Driver Power Survey. For out latest, 2018 Driver Power poll, though, the company had tumbled to 21st place out of 26 manufacturers, with a concerning 28.2 per cent of customers reporting faults with their cars in the first 12 months of ownership.

You get three-year warranty cover with unlimited mileage on all BMW models including the X3, which is pretty much par for the course in the premium brand sector. Unless you buy an Audi Q5, which has unlimited mileage cover for years one and two, but has a 60,000-mile warranty limit that comes into play at year three.

The BMW X3’s onboard computers determine when you need to take your car in for servicing and maintenance, based on how you use it. It’s a good idea in theory, but in practice owners have appeared quite critical of the servicing costs when responding to our Driver Power satisfaction survey.