The first thing you notice when stepping into the BMW X3’s cabin is the luxurious ambience created by stylish design and good quality materials. All models get leather upholstery and, as usual for BMW, seat comfort, the driving position and the layout of controls are exemplary. It’s quiet and refined on the move too, and with a well-controlled ride and a decent infotainment system part of the standard spec, it’s definitely a good place to rack up some miles.

The latest BMW X3’s extended wheelbase means there’s plenty of space inside for occupants, and the interior feels noticeably more spacious than the old car’s. In fact it feels pretty similar to the amount of room offered by the larger BMW X5 model.

Up front the driver and passenger are spoiled for space, but you can also get full-sized adults into the rear – there’s enough legroom for a six-foot adult to sit behind a similarly tall driver. 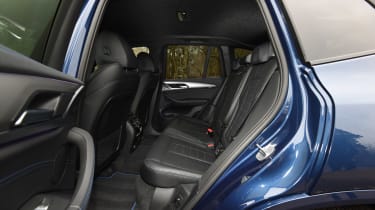 Headroom is not an issue wherever you sit, even when the airy panoramic sunroof is fitted. You can get three people onto the rear bench comfortably too, as long as they don’t mind rubbing shoulders. As mentioned previously there’s no option to fit a third row of seats – presumably BMW believes it would take the X3 too far into the territory of the larger X5

THE X3’s size hasn’t changed much, so practicality is strong. The 550-litre boot is square, and with its low lip it’s no trouble to load and unload heavy items. It’s not as spacious as the Jaguar F-Pace, though, which has a 650-litre luggage area. The Jag’s total capacity of 1,740 litres makes it the winner in terms of sheer load volume, too. However, the X3, offering 1,600 litres of loadspace, is bigger than the Volvo XC60 by a comfortable 150 litres.

The BMW X3 keeps things simple when it comes to towing. It doesn’t matter which engine, drivetrain and transmission you go for, the maximum braked trailer towing capacity is 2,000kg.