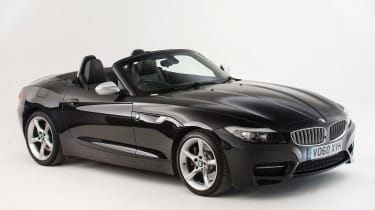 Some enthusiasts thought BMW had sold out by offering a coupe-cabrio, but this is a brand that doesn’t do things by halves, which is why the Z4 Mk2 is its best sports car yet. The Z4 has proven a brilliant choice for the enthusiast, but it’s also perfect for anyone who just wants a great-looking sports car that’s fast, agile and usable. Despite the fun on offer, the Z4 can be driven every day if you don’t need a lot of load space. The 2011-facelift four-cylinders are worth seeking out, as they don’t skimp on performance yet they’re more economical than their six-cylinder predecessors.

For years BMW sold its products using the slogan ‘The ultimate driving machine’ – and with a reputation for building brilliant drivers’ cars, you’d think it would have a back catalogue of two-seater roadsters.

However, apart from the rare and costly fifties’ 507, BMW shunned two-seaters for most of its 100-year history. It wouldn’t be until the 1996 Z3 that the brand would tap into the affordable sports car market.

While the Z3 wasn’t a bad start, the original Z4 was far superior – and its Mk2 replacement was even better thanks to its sleeker design, coupe-cabrio format and improved dynamics. With the summer here at last, now’s the time to track one down.

The BMW Z4 was launched as a replacement for the BMW Z3 in 2002. The original model was on sale for six years before being replaced by the Mk2 in 2009. It’s this later version that we’re focusing on here. 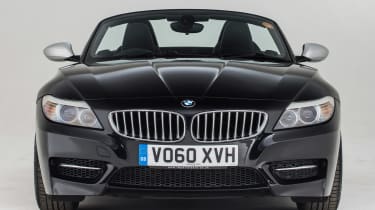 The second-generation Z4 reached the UK in August 2009. Initially there were 204bhp sDrive23i, 258bhp sDrive30i or 306bhp sDrive35i options (all with six cylinders), but by March 2010 BMW had added the super-quick 340bhp twin-turbo 3.0-litre sDrive35iS, with the extra power coming from changes to the turbo set-up.

In spring 2012, the sDrive23i and sDrive30i were superseded by the 184bhp sDrive20i and 245bhp sDrive28i respectively. Both were powered by a 2.0-litre four-cylinder turbocharged engine; the 35i continued as before.

A facelifted Z4 reached showrooms in April 2013, with redesigned headlamps, extra equipment and new colours. There was also a fresh entry-level sDrive18i, with a detuned 156bhp 2.0-litre turbo.

The six-cylinder has a glorious soundtrack to match its performance, but the sDrive30i is all you need; any more merely adds to the running costs. This is a 3.0-litre, while the 23i has a 2.5 six-cylinder; lesser cars have 2.0-litre four-cylinder power. Both manual and DCT dual-clutch auto boxes are superb; it comes down to personal preference. 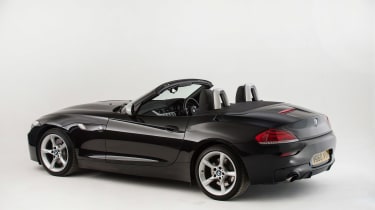 Choose between standard and M Sport specs, the latter getting leather trim, sportier details, 18-inch wheels plus sports seats and suspension. Standard cars have dual-zone climate control, a CD/tuner, electric windows and xenon lights. The more power you go for, the higher the specification.

Alternatives to the BMW Z4 Mk2

The only other premium two-seater coupe-cabrio is the Mercedes SLK, which is great value, decent dynamically and extremely well built. It’s reliable, too, and in third-generation form came with a diesel option.

The Z4’s toughest rivals are the Porsche Boxster roadster and Cayman coupe, which are just as beautifully built and even better to drive. With a cast-iron image, they’re also costly to buy – but worth every penny.

Audi’s TT offers the security of four-wheel drive and is dynamically superior, plus there’s a frugal diesel option. If dynamics are your priority the Nissan 370Z might suit – but refinement is poor and running costs are high, and it doesn’t have the fabulous build quality of its German competitors.

The cabin isn’t always as squeak and rattle-free as you might expect. Gloveboxes and cubbyhole lids are the most rattle-prone. 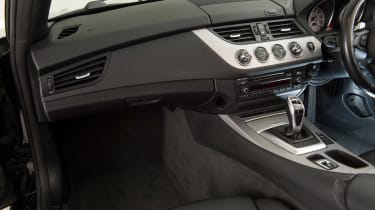 The drop-top is generally reliable, but hydraulic fluid leaks aren’t unknown, leading to stained interior trim and the roof being stuck up or down.

When the seals fail, the tail-light units can fill up with water. The only cure is to fit a new cluster – however, the work is usually done under warranty.

Faulty injectors can lead to the powerplant cutting out or running unevenly. It’s most likely on cars that have covered a high mileage.

Crammed with high-quality materials and easy to use, the Z4’s cabin is a great place to spend time. The seats are supportive and, while there’s only room for two, even tall adults can get comfortable. Boot space isn’t great, though; it’s 310 litres with the roof up, or 180 litres with it down. 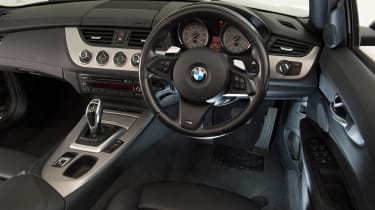 Since BMW introduced its Service Inclusive package in January 2010, virtually all Z4s have been bought with it. For £475 it takes care of all maintenance for five years or 60,000 miles, covering the cost of all routine servicing parts and labour. It’s transferable between owners.

Unlucky enough to find a Z4 without the package? Condition-based servicing means no two visits cost the same. The system measures time and distance, and flags up what needs to be replaced and when; Z4s can go up to two years and 20,000 miles; 18,000 is more typical. Costs vary, but expect to pay £400 each time. As all Z4 engines are chain-driven, there are no cambelts to replace. 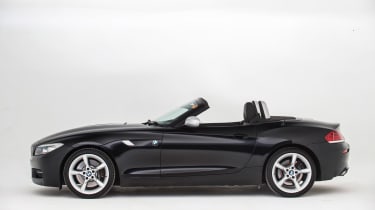 The Z4 Mk2 has been the subject of four recalls; the first was issued in July 2012 due to potential electric power-steering issues. The next came in April 2013, because some cars could refuse to start or cut out when being driven. This issue centred on an electrical short circuit.

Three months later, manual Z4s were recalled as the clutch could fail. And the most recent recall, in July 2014, was prompted by the engine reverting to limp-home. This was due to the valve timing going out of adjustment.

The Z4 is too rare to make it into our Driver Power survey, but other BMW models do. They generally score above average, with high spots typically being the brakes, handling and performance. It’s usually reliability and ride quality that bring the overall scores down, along with running costs.