When we first saw the Cadillac Miller-Meteor ambulance/hearse cross in Ghostbusters, it was a rusty black wreck of a thing. 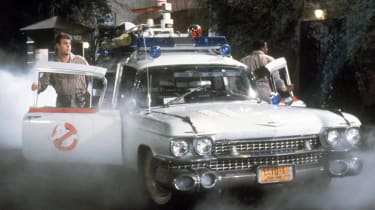 When we first saw the Cadillac Miller-Meteor ambulance/hearse cross in Ghostbusters, it was a rusty black wreck of a thing. However, after Ray did extensive repairs on it, it gained the nickname ‘Ecto 1’ and became a symbol of the Ghostbusters crew.

Capable of carrying all of the kit Ghostbusters Peter, Ray, Egon and Winston needed to do their job properly, Ecto 1 is one of the most memorable components of the Ghostbusters movies.

Miller-Meteor was a coachbuilding firm set up in the 1950’s in the US, specifically to build and modify ‘professional vehicles’. It specialised in Cadillac, building cars like the ambulance and hearse models based on the Cadillac de Ville and Eldorado series cars. Not many ambulance models were actually built, as laws in the US came into force in the early 1970’s that restricted passenger cars being used as emergency medical vehicles.

Although Ecto-1 was based on the Cadillac ‘professional chassis’, the car had clear design cues from the wild finned Caddy passenger cars like the Eldorado. The bulging chrome foglamps, long creased bonnet and concealed rear wheels gave the Eldorado (and Ecto 1) an iconic design and one of the most memorable shapes in motoring history. The shape and design of the car never changed throughout the Ghostbusters franchise, although the upcoming all-female reboot of Ghostbusters uses a newer Cadillac Brougham hearse as Ecto-1 instead.