Make no mistake – the Colt Ralliart is a swift and entertaining hot hatch. But it falls short in one key area: desirability. The Mitsubishi can’t match its rival here for charisma or charm, and its lower price tag doesn’t make up for that. 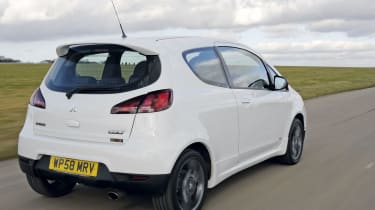 Forget GTI, MPS or VXR. If you want a high-performance brand with real rally pedigree, Ralliart has tasted success at the highest level. It is famous for its exploits with Mitsubishi’s Evo, but now the Colt has been given the tuning arm’s full attention. Given the saloon’s over-the-top styling, the Ralliart version of the supermini is a bit of a disappointment – there’s not much to set it apart from the standard car on the outside. Anthracite alloys and a body- coloured rear spoiler and side sills identify the performance model, but it looks sober next to the in-your-face Abarth.

Mitsubishi has shown even more restraint inside. Although you get a pair of sports seats, a set of alloy pedals and some silver-rimmed instruments, it still feels ordinary. Standard kit includes air-con, cruise control and a six-speaker stereo with an auxiliary input, but there are acres of grey plastic and the big A-pillar creates a blindspot. If practicality matters, the Mitsubishi leads the way – it has far more generous rear head and legroom. And while the 160-litre boot is 25 litres down on the 500’s, you can get a five-door Colt for £500 extra; the Abarth is a three-door only.

Nobody buys a hot hatch purely for practicality, though, so how does the Mitsubishi measure up where it really counts? Hit the road and the first thing you notice is the noise – the Colt clearly has less sound deadening material. Not only do you hear more from the engine, wind and tyres, there’s even the rattle of surface grit hitting the inside of the wheelarches.

The Ralliart’s steering is heavy, too, which is at odds with its supermini proportions and only serves to slow its responses. Under the bonnet you get the same 147bhp 1.5-litre turbo as in the old CZT. It’s responsive and pulls strongly, firing the Colt from 0-60mph in 7.3 seconds. That’s eight-tenths faster than the Abarth, and it feels every bit quicker from behind the wheel. This impression is aided by the light and positive gearshift.

The Colt also led the way in our brake test, although the margin of victory was very narrow – it drew to a halt from 60mph in 36.2 metres. While the 500 trailed by 10cm, it was more composed, with less dive. The squirming Mitsubishi’s over-active ABS makes for unpleasant stopping. Ralliart has revised the Colt’s suspension, and the lower, firmer set-up does provide sharp body control when cornering. But this comes at the expense of ride comfort. It thumps into potholes and prompts creaks from the dash, raising question marks over build quality.

Chart position: 2WHY: Experts at Ralliart have given the Colt the go-faster treatment. It’s quicker and cheaper than its Italian rival.