In a niche where style is everything, can the fashionably late Mitsubishi Colt CZC make a grand entrance? 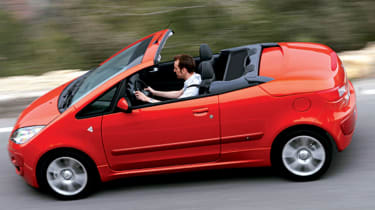 Pretty styling makes the Colt a welcome addition to the CC supermini class. The 147bhp turbo model is expensive, but its specification and pace make it unique in this sector. Anticipated low sales volumes guarantee exclusivity, while decent interior space up front boosts its appeal. The lower-spec 107bhp variant also represents great value at £13,999.

Can Mitsubishi's trendy new coupe-cabriolet the Colt CZC cut it in the stylish supermini arena? To find out, we hit the road this week in the latest small hatch to gain the ultimate accessory - a folding metal roof.

Our 1.5-litre turbo test car boasts 147bhp, and sprints from 0-62mph in 8.4 seconds. That makes it the fastest supermini CC on sale - and it's also one of the best looking, thanks to Pininfarina's input. The Italian firm not only co-designed the newcomer, it builds it, too, but from head-on it's difficult to separate this car from the normal tin-top.

However, it's all change from behind the front wheels, and the nifty roof arrangement gives the hood-up CZC a typically awkward, cab-forward stance. The roof stows in 22 seconds - after you've released a pair of clips on the windscreen header rail, it folds neatly into the boot at the touch of a button.

You need to be stationary to perform the metal-folding gymnastics, but the finished result is worth the effort, as the smooth rear deck gives the car a much cleaner look.

The interior will be familiar to any existing Colt owner, as the dashboard is carried over virtually unchanged. As with the Peugeot 206 CC and Nissan Micra C+C, the Mitsubishi is billed as a 2+2, but in reality the pair of cramped rear seats are for shopping and luggage rather than people.

Unlike its rivals, there's a decent amount of headroom with the Colt's roof in place, although the powerful climate control system and standard heated and part-leather seats mean you can enjoy fresh air all year round.

That wind-in-the-hair impression is heightened on the road by the removable windbreak. It fits behind the front seats and ensures the cabin remains draught-free and relatively quiet, even at high speeds. The only downside is that the device is fiddly to install, and renders the rear seats useless.

Roof-down motoring also enables drivers to fully appreciate the burbling sound that comes courtesy of the CZC Turbo's sports exhaust - although in performance terms, the extra 130kg the clever top adds takes the edge off the MIVEC 1.5-litre powerplant.

Nevertheless, Mitsubishi has done its best to ensure the turbocharged model is entertaining by fitting sports suspension, a quicker steering rack and more powerful brakes - although the Colt is still no sports car. Admittedly, the accurate steering is a pleasure to use, but the extra stiffening simply isn't enough to prevent shudders over rough surfaces from entering the cabin.

The extra weight also means there's plenty of body roll during hard cornering, and the notchy gearbox only serves to highlight the engine's lack of off-boost response.

Mitsubishi is expecting to sell 1,000 cars every year, and only 250 of those will be turbocharged examples. The firm believes most CZC buyers will be women - and the combination of generous standard equipment, cute looks and an attractive price tag should be enough to guarantee a healthy order book when it hits dealers next week.