A ghastly chunk of retro automotive Americana foisted onto the UK market, the Chrysler PT Cruiser Convertible was as bad as it looked 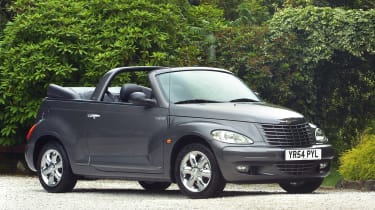 The Volkswagen Beetle has a lot to answer for. We're not talking about the original Beetle, mind, this is the late-Nineties version. The New Beetle kicked off a craze for 'retro modern' remakes of old models. While the Beetle was successful, as were the MINI and Fiat 500, the Chrysler PT Cruiser was less convincing, especially when the roof was chopped off.

It had started so well for this retro looking hatch, too. The original Plymouth Pronto Cruizer concept followed in the footsteps of the hot rod-inspired Plymouth Prowler, and its bulbous wings and tall grille gave it the look of a Fifties custom car that would certainly appeal to the US market.

But the late Nineties was a difficult time for Chrysler. It was in partnership with Mercedes, and the German firm wanted to make cuts to bring Chrysler back into profitability. It did this by dropping the Plymouth brand, so the Pronto Cruizer became a concept without a home, while the production version appeared with a Chrysler badge on the nose.

Now called the PT Cruiser - PT standing for Personal Transport - the concept's transition to reality hadn't been very successful. There was a taller roof with larger windows that you could actually see out of, and the overall design was more upright. The PT Cruiser was no oil painting compared to the concept, while in the US Chrysler classified the car as a truck, in an effort to bring the average emissions of its commercial vehicles down.

Still, Chrysler brought it to the UK, where it sold in low numbers, because it wasn't competitive with other retro models like the MINI and Beetle, thanks to poor build quality and sloppy handling.

Whoever decided to add a convertible to the line-up probably had good intentions, but the execution was pretty poor. Removing the roof meant that any structural rigidity that existed disappeared completely, so Chrysler had to add a ghastly roll hoop between the front and rear seats. Bosses claimed the roll bar helped airflow over the back seats, but it got in the way when getting in and out, even with the roof down. It's no surprise that the PT Cruiser Convertible was only on sale for two years and sold in modest numbers.