The Mondeo feels much more upmarket than before, both inside and out

While the Mondeo is undoubtedly still recognisable, Ford’s emphasis is to take it away from the humdrum rep-mobile of old, and make the model stand out from the crowd. The styling was first seen on the US-market Ford Fusion back at the 2012 Detroit Motor Show, but production delays caused by the global recession pushed back the car’s European launch until 2014, while a facelift arrived in 2019.

The sleek front is similar to the latest Ford Focus and Fiesta, complete with an Aston Martin-style grille, while the rear end has a clean and smart appearance. The shape looks – and is in fact – more aerodynamic, thanks to an arching roofline. Ford claims the new profile, active grille shutters and underbody panels contribute to a 10 per cent reduction in drag. ST-Line models look even smarter thanks to 10mm lower suspension, a neat bodykit, honeycomb grille and tinted windows. 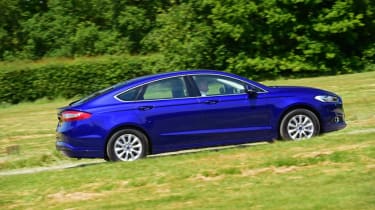 Inside, the Mondeo is not only a major improvement over the fussily styled old car, but better than the US-spec Fusion too. Sober (but solid) materials lend it a mature, premium look and feel. It's a shame that the centre console plastics let it down a bit, but the rest of the touch points are nicely soft to the touch.

The range-topping Vignale version adds chrome detailing on the outside, unique alloy wheels and a bespoke leather dash. It’s certainly plusher than the standard model, but not yet plush enough to see off the likes of the BMW 3 Series and Mercedes C-Class with which the Vignale competes at this price point.

The touch-sensitive climate control panel fitted to the Mondeo in America has been ditched in favour of a far more user-friendly physical button set-up. You still get a large eight-inch central touchscreen for things like the radio and sat-nav, but the climate control and heated seats are now controlled via conventional buttons.

A DAB radio/CD system is standard (including sat-nav on the Titanium grade), or a premium 12-speaker system is optional. Two USB connectivity ports are provided, while the latest SYNC3 voice-activated connectivity system enables you to make hands-free phone calls and hear text messages. It also lets you control music by using your voice, and allows wireless connections to your devices. Connectivity features such as Apple CarPlay and Android Auto are also included.