The Mondeo's engines balance power and efficiency, but the big Ford lacks the sharpness of the old model

Thanks to the fact the latest Mondeo is part of Ford’s ‘One Ford’ philosophy, more emphasis has been placed on ride comfort and interior quality than driver enjoyment and handling agility. Where the old car was the sharpest steer in this class, the new one feels softer and less focused. The steering, for example, feels much lighter and has less feel, and the body leans more when you’re cornering at speed. It also feels cumbersome around town thanks to its sheer size and tricky visibility. ST-Line cars with sports suspension do handle with a bit more composure, however.

That said, the Mondeo is a far more refined prospect than before, with a notably better ride quality. It's softer around town, particularly on models with smaller wheels and standard suspension, while it's excellent on the motorway too, thanks to well isolated wind and road noise. 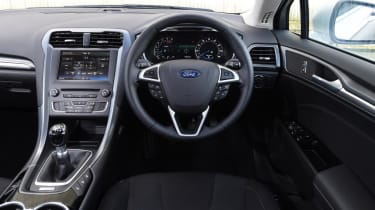 It’s still reasonably pleasant to drive, but it has lost its sparkle that made the older models special – or the class-leader, the highly enjoyable Mazda 6. Optional self-levelling rear suspension is worth considering if you’re towing or carrying heavy loads regularly, while four-wheel drive is also available on some models.

The Mondeo offers petrol, diesel and Hybrid options to buyers. Although diesel Mondeos take over 60 per cent of sales (largely because of the dominance of the fleet market, which is very concerned with CO2 emissions), the 1.5 EcoBoost 165PS petrol has greatly impressed us. It doesn't have a major slug of low-down torque, but it revs very cleanly, sounds good and is supremely quiet when cruising.

Surprisingly, Ford offered its petrol 1.0-litre EcoBoost in the big Mondeo, but it does actually cope. The flat power delivery from this 123bhp engine means it needs to be worked hard to get the best from it, though. The first three gears are closely stacked to aid round-town performance, but fourth, fifth and sixth are more widely spread for relaxed cruising. However, that means frequent downchanges are needed when overtaking or tackling steep hills.

Ford also offered a 2.0-litre EcoBoost petrol Mondeo with 237bhp, although it's no longer offered. It wasn’t badged as an ‘ST’, but it was the fastest model in the range whe it was for sale. As of 2019, the only petrol option is a 1.5 EcoBoost

As for turbodiesels, Ford focuses on its latest 2.0 EcoBlue motor. It comes in 150PS and 190PS forms with 148bhp and 187bhp outputs, although Ford also sold a punchier 207bhp version in the past. As it stands, the 148bhp model is the manual and the 187bhp version is found with the auto gearbox, and neither feel especially rapid. 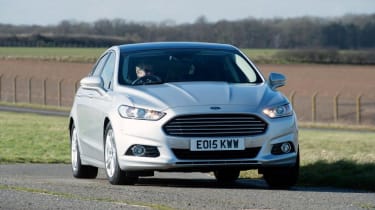 The petrol-electric Mondeo Hybrid accounts for only a tiny handful of UK sales. Emissions as low as 98g/km mean it's an attractive company car, but the car's increased weight blunts the Mondeo's stodgy handling even further and the CVT transmission makes the powertrain unpleasant to use under acceleration.