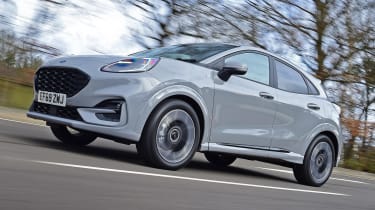 Ford’s 1.0-litre three-cylinder EcoBoost unit has received much praise for its versatility and ability to blend decent power with good returns from a tank of fuel. So, it’s probably no great surprise that the engine is at the core of the Puma range.

The flexible 1.0-litre powerplant comes in three guises for Puma customers. The base 123bhp version returns a maximum 48.7mpg, with 138g/km of CO2, while the same unit with 48-volt mild-hybrid assistance is able to improve on these figures a little by delivering a claimed 50.4mpg and CO2 levels of 127g/km. The more powerful 153bhp variant has the same fuel average fuel economy on the combined cycle of 50.4mpg, with emissions from 127g/km.

The mild-hybrid system captures kinetic energy naturally lost while driving, particularly during braking, before storing it as electricity in a small battery. This electrical energy is then used to assist the engine during acceleration, reducing the amount of petrol needed to make decent progress. 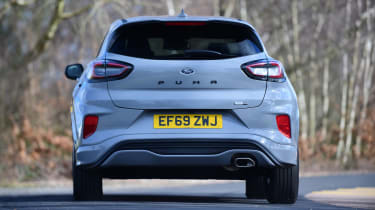 Drivers can view a display on the digital instrument panel to see exactly when the system is in action. Alongside it, cylinder deactivation means the engine can run on two cylinders where driving conditions allow, to save more fuel.

Insurance premiums for the Puma range should be competitive with those of rivals. The base 123bhp Titanium model comes in at group 11, while the top-spec ST-Line X Vignale cars with 153bhp occupy group 15.

Competitors such as the Renault Captur start at group 8 for an entry-level 99bhp version and move through to group 21 for a top-of-the range model with 152bhp.

Our experts predict the Ford Puma will retain a healthy 51% of its original value over 3 years and 36,000 miles, whereas the Renault Captur keeps an average of 43% over the same period.