Honda's diesel Civic makes a decent proposition for those doing high miles, but how does it rate when paired with an automatic transmission? 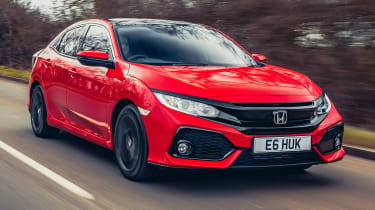 Adding an auto option to the Civic diesel hasn’t transformed Honda’s family car offering, but if you’re in the market for a self-shifting family hatchback that can do serious mileages between refills, then the i-DTEC auto should definitely be on your list. Just be aware, of course, that you are taking a hit in efficiency and driver involvement by losing the third pedal. We’d steer clear of our car’s EX trim and look further down the Civic range for better value, too.

Consumers may have caught a cold as far as diesel is concerned – but many car companies have invested lots of money in making them a more compelling choice than ever.

The Honda Civic is a good example of this; a rival for the VW Golf TDI and Ford Focus EcoBlue models, the 1.6-litre diesel version of the Japanese brand’s family hatchback is now available with a nine-speed automatic transmission. And we’ve had a chance to try it out in the UK.

This is the first time that the Civic has been offered with a diesel auto option. The combination is available with both the five-door hatchback variant and the recently introduced four-door saloon – and you can also order it with any of the Civic’s myriad trim levels. 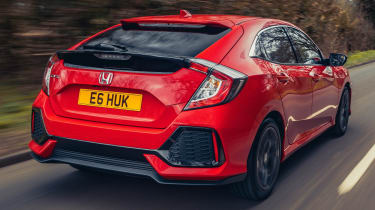 Beyond the raw numbers, though, the Civic makes a decent case for itself. The gearbox has pretty smooth shifts and its nine ratios means that it can keep the revs nice and low. That’s a clever move, because a bit of a rasp starts to emanate from under the bonnet at around 2,400rpm, and it escalates to a clatter soon after that.

The auto seems keen to shift up at around 2,250rpm instead – at which point the i-DTEC engine isn’t really any more grumblesome than many of the three-cylinder petrol engines that dominate this area of the market. You’d be hard-pushed to know the difference on a motorway – apart from the fact you’ll be making much less frequent fuel stops in the diesel.

The set-up is designed more for relaxed, refined motoring than any great involvement, of course. And sure enough, if you do resort to the paddles mounted behind the wheel, you won’t find progress anywhere near as involving (or fun) as you would with a manual. But the transmission is smart, slick and quick enough to deliver rapid downshifts when you ask for them, and with lots of torque in reserve, this remains a car capable of brisk progress. 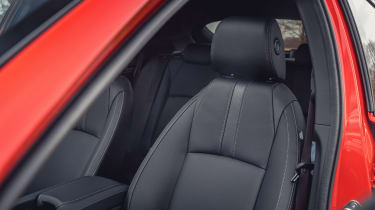 The rest of the Civic package is unchanged. It rides pretty nicely on the UK’s ruined roads, the boot looks generous against all of the opposition (with the exception of the Skoda Octavia), and there’s enough space inside for four adults to travel in reasonable comfort.

The build quality feels solid, although bits of the cabin finish are already beginning to look old-fashioned and the infotainment system remains clunky at best – or downright annoying at worst. At least you can bypass it with Android Auto or Apple CarPlay.