Honda has tried to deliver a more grown-up driving experience with the tenth-generation Civic, which means that refinement is improved, while the lower and wider stance delivers assured handling. More importantly, the company has dropped its tried-and-tested naturally aspirated petrol engines in favour of downsized turbos. 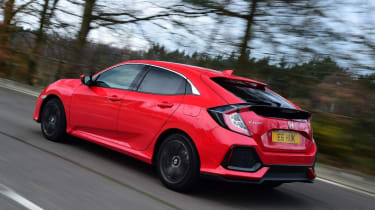 Under the skin is Honda’s latest global compact car architecture, which means that the Mk10 Civic is around 15kg lighter than the old car, and the structure is over 50 per cent stiffer. It features fully independent rear suspension with struts at the front, so it’s the most sophisticated choice in the class from an engineering standpoint. Adaptive dampers are standard on EX models, and these allow the car to be optimised for comfort or more focused handling as you require.

The low driving position is comfortable and feels sporty, while the steering is well weighted and fast in its response, offering good feel. There’s lots of grip on offer and the clever torque vectoring technology helps the car hold its line through corners. The EX model with adaptive dampers is well controlled in terms of body roll thanks to the dampers’ sportier setting, and the Honda is agile as a result.

In comfort mode it’s refined and smooth, with a relatively compliant ride, although our noise tests showed the Civic was a little louder at 70mph than some rivals. The 1.0-litre turbo sits at higher revs at that speed, which contributes to that extra noise.

However, it’s a willing engine and is more characterful than the VW Golf’s four-cylinder 1.5 TSI unit, but not as fun as the 1.2 PureTech in a Peugeot 308. The Honda's manual gearshift is fantastic, though and it has a precise action that’s better than in almost any other hatchback on sale.

At launch, the Honda Civic was available only with a choice of two small-capacity turbo petrol engines, but a diesel was added to the range with 12 months of launch.

The entry-level petrol engine, a 127bhp 1.0-litre three-cylinder turbo unit, will take the car to a top speed of 126mph. However, it delivered some mixed results at the track when we tested it. Despite nearly matching the 127bhp 1.2 TCe engine in the Renault Megane and developing a muscular 200Nm of torque, the Civic trailed the less powerful but lighter 108bhp 1.0 TSI VW Golf at the track. It was half a second slower in the sprint from 0-60mph with a time of 10.1 seconds, while the Civic trailed the Golf in-gear, too.

On the road you have to work the Honda as hard as the Renault to keep up with the VW. The Civic’s engine is eager to rev, but there’s more vibration than in either rival, and it’s more vocal than the VW’s three-cylinder, too. 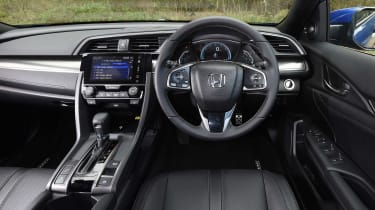 Some buyers may mourn the death of Honda’s famous naturally aspirated, high-revving VTEC engines, but in reality, the new turbocharged units are more responsive and easier to drive. There’s very little lag, and with the torque appearing lower down the rev range, you’ve less need to keep changing gear.

The more powerful 1.5 gets 180bhp, but feels heavier and not all that much faster on the road. Honda claims 0-62mph in 8.2 seconds (which falls to 8.3 seconds with the CVT), although in many situations you’d be hard-pushed to tell the 1.5 apart from the 1.0.

With 118bhp, the diesel is the least powerful engine in the Civic. But while it's more expensive to buy than the 1.0-litre unit, it makes up for that with better fuel economy and lower emissions, and has much more torque.

It's not as refined as the 1.0-litre, but it'll suit high-mileage drivers down to the ground. Not only is there a welcome lack of vibration through the steering wheel, pedals or gearlever, the engine also pulls strongly and willingly from low revs. In fact, it makes the Civic a tremendously easy car to drive. Rather than having to work your way up and down the six speeds in the gearbox, you can generally rely on nothing more than a gentle flex of the right ankle on the accelerator to keep up with traffic.