Perceived quality falls short of rivals like the VW Golf, but everything is well built, and there’s loads of standard kit

Honda has taken a relatively low-key approach to the design of the Mk10 Civic. Elements of the old model’s angular shape remain, but the newcomer has traditional hatchback proportions. However, the fussy treatment at the front and heavy-handed rear means it can’t match rivals like the Renault Megane or Mazda 3 for kerb appeal.

Specifications for the 1.0-litre turbo model range through S, SE, SR and flagship EX specs. The 1.5-litre cars are available in Sport trim only. 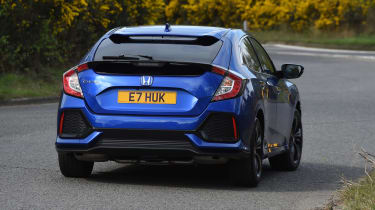 The watering down of the old car’s quirky design is most noticeable inside, where the double-deck dashboard has been ditched in favour of a more restrained and upmarket layout. The TFT dials give the cabin a hi-tech feel, while the angled centre console features the seven-inch Connect infotainment screen.

The Honda feels robustly constructed, but the plastics lower down in the cabin look and feel cheap, while the digital dials for engine temperature and fuel level are hard to read.

S cars come with fabric seats and steel wheels, but they do get automatic headlights as standard. Stepping up to SE adds alloys and climate control, while a black grille, chrome trim for the windows and 16-inch wheels are also thrown in to decorate the exterior.

Sport models with the 1.5-litre engine get some racy details like the central exhausts and a more aggressive bodykit, as well as LED headlights and a black grille. Sport is largely comparable with the smaller engine’s SR spec but adds some exterior styling embellishments, a central dual exhaust pipe, wireless phone charging and a more powerful stereo.

Honda's Connect infotainment system first appeared on the previous-generation Civic, so it’s already starting to look a little dated. It has an aftermarket look, and its seven-inch screen is relatively small. Plus, its graphics look a little blocky. 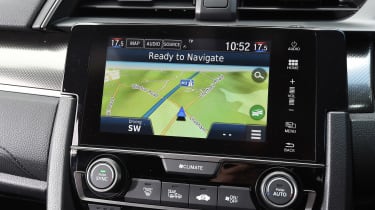 The set-up is standard on SR models and above (S and SE variants getting more conventional radio units) and features sat-nav, DAB, Bluetooth, Apple CarPlay and Android Auto.

It’s a match for rival set-ups in terms of features, but the overall package is lacking. For a start, the 7-inch screen is relatively small, plus it’s not as well integrated; it looks like an aftermarket unit. It’s the least responsive screen, and often your touch won’t register. Plus, the menus are confusing and very difficult to use, especially on the move. Parts of the air-conditioning system are only controlled via the screen, too, which can be frustrating.

The integrated sat-nav is easy enough to use, but it’s not as intuitive as the Golf’s. The smartphone link works well, though, so we found it easy to use our device; wireless charging is an option at around £400.