Despite Honda ditching its innovative Magic Seats, the Civic is still full of practical touches

Although it's longer, lower and wider than the old Honda Civic, this latest-generation car gains little in the way of practicality. As is the Japanese way, the latest Civic is crammed full of practical touches, while a big boot and wide opening make it enormously practical day-to-day.

The saloon is no longer available, but all hatchback models come with five seats, including ISOFIX points in the back. Buyers in the US also get a coupe, but bosses have already confirmed that the Europe-only Civic Tourer estate will not be replaced, meaning those after outright space will need to look elsewhere.

As you’d expect for a family car, the Honda gets a decent amount of storage. There’s not quite as many cubbies as in the Golf, but there’s a large glovebox and decent door bins. The centre console has room for phones and trinkets – although opening the armrest is tricky on the move, because the catch is too far back. Cable clips ahead of the gearlever give you somewhere to tidy your wires when charging your phone.

Space inside the Honda Civic is good. There’s loads of knee room in the back, and while taller adults may struggle slightly for head room, getting comfortable shouldn’t be a problem for most.

Honda has done away with the previous-generation car’s innovative Magic Seats, allowing engineers to move the fuel tank from its unusual position under the front seats and lower the front seat hip point. This means both the driver and front seat passenger sit lower than before – offering a sportier and more engaging driving position. There’s loads of adjustment in the steering wheel, too. 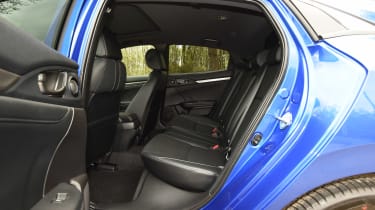 The Honda Civic’s 478 litres of carrying capacity is 44 litres up on the Renault Megane and 98 litres bigger than a VW Golf’s, and there’s plenty of underfloor storage. However, an awkward step in the boot floor means you don’t get a flat load area with the rear bench folded, while the parcel shelf is just a fabric retractable curtain that pulls across the load area from left to right; it feels flimsy and is awkward to use.

The sloping tailgate will pose more of a problem than outright space, however. Where a VW Golf gets a more upright rear end, the Civic’s sporty design might prove troublesome when it comes to loading big, square boxes.