Can the new Hyundai Tucson take on top diesel SUVs such as the Peugeot 3008 and Skoda Karoq? 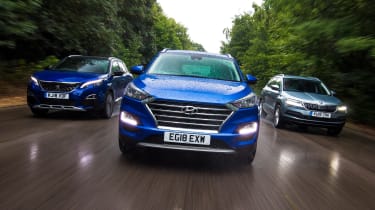 The speed at which the SUV market is moving means if manufacturers aren’t innovating, or are simply standing still, they’re actually going backwards in the grand scheme of things.

Hyundai knows this, which is why it’s continuing its latest product offensive with a new version of its Tucson mid-size family SUV. While there’s new 48-volt mild-hybrid technology on the way (it’ll arrive later this year), it’s the new 1.6-litre CRDi turbodiesel we’re testing here in 113bhp form.

Diesel isn’t quite dead yet and still accounts for a good chunk of sales in this sector, so this new 1.6 unit could help steal some sales for Hyundai. But it’s got many very talented rivals to take on if it wants to do so. One is the Skoda Karoq, which is available in 1.6 TDI form to match the Tucson.

The other is Peugeot’s 3008, tested here with the brand’s new 1.5-litre BlueHDi turbodiesel unit. These are currently the top two models in this class, so can the Hyundai overhaul this established pairing and take the win in this test? Let’s find out. 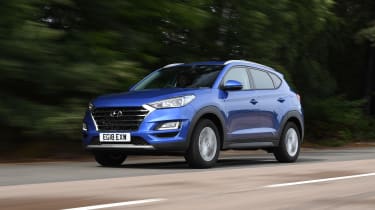 Hyundai’s updated Tucson marks the debut of a new 1.6-litre CRDi turbodiesel engine, which is the unit we’re testing here in SE Nav trim. Priced from £25,345, it’s right in the middle of the family SUV heartland, and it’s taking on the two toughest rivals here. So how does the Tucson fare?

Conversely, the ride is compliant. The suspension absorbs cracks and crevices fairly sweetly, with smooth and unhurried, relaxed damping.

However, this feeling extends to the way the car corners. Family SUVs don’t necessarily need to be dynamic, but the Tucson’s sloppier body control doesn’t inspire much confidence. The steering, too, is weirdly sensitive just off centre, but then lacks bite as you apply lock. The light steering weight is well judged for this type of car, though, so it means the Tucson is at least easy to manoeuvre in tight spaces.

This relative lack of dynamism is reflected by the engine, although none of the motors in the cars in this test is all that potent. The new 1.6-litre CRDi turbodiesel is fairly smooth and, mostly, quiet. At certain revs there is some resonance, so you do hear a bit of a diesel drone occasionally, but it’s nowhere near as loud as the Skoda’s engine. 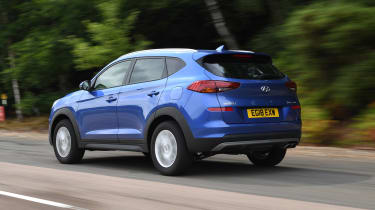 In our 0-60mph test at the track, the Tucson was the slowest car, albeit by only two tenths, taking 11.7 seconds. A relatively strong slug of torque from lower down in the rev range gave acceptable in-gear performance, but it trailed the punchier 3008. Where the Hyundai beats the Peugeot is with the slickness of its gearchange. It slots home more smoothly than the French car’s, which feels more rubbery.

Overall, it’s a relatively refined and comfortable package, but one that’s lacklustre to drive. Given its rivals also offer plenty of the former and more of the latter, the Tucson is capable rather than class-leading.

Testers’ notes: “The Tucson features trailer stability assist, so if you intend to tow a caravan this will be a welcome addition. The maximum towing limit of 1,400kg is 100kg less than the 3008’s, however.” 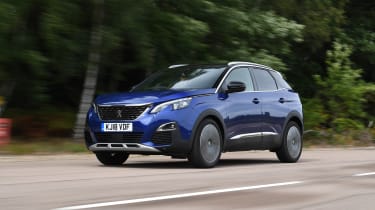 The Peugeot 3008 is a former winner of our Best Mid-Size SUV award, and now there’s a new 1.5-litre BlueHDi 130 turbodiesel engine. We’re testing the car in Allure trim, which starts at £27,000 (although our pictures show a more lofty GT Line Premium). It’s pricier than its competition, but is it a better bet?

That small wheel ensures the 3008 steers quickly, but this SUV hasn’t been designed to be sporty. The suspension set-up focuses on comfort, and it serves up a sweet ride and handling balance.

The increased ride height means plenty of suspension travel, which gives the 3008 a level of absorbency to its ride that works fairly well in the UK. It’s more compliant than the Skoda, but harsher inputs to the suspension still cause a shake and a shimmy through the chassis.

Wheel control is okay over bumps, but they do sometimes thump into potholes. It feels as though there’s a threshold of bump size beyond which the 3008 struggles to contain the energy. The damping breaks down and the ride becomes less settled.

There’s just enough grip to keep up with the speed of the steering, but the compliance in the damping means there’s a noticeable level of roll as you up the speed; it’s not as well controlled as in the Karoq.

Still, the new engine is a strong point. With the most torque at 300Nm, the in-gear performance was punchy and the 3008 beat the Tucson’s 0-60mph time, taking 11.5 seconds. Peugeot has had years of development with its diesel engines and although the tide might be turning slightly, this fuel still makes sense when the application is as good as it is here. 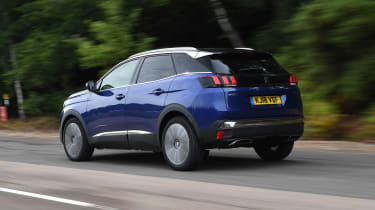 The torque gives added flexibility, where the Hyundai and Skoda feel flat. It’s one of the Peugeot’s big positives; you don’t have to work the six-speed manual much, which makes it relaxing to drive. The transmission is acceptable, but not the greatest.

Refinement is strong at a cruise. There’s some noticeable diesel rumble going up through the gears, but it’s quiet when the revs subside. It’s the relatively relaxed ride and unflustered feel that appeal here.

Testers’ notes: “The 3008’s infotainment is good, but one irritation is that the climate controls are integrated into the screen, so you have to jump out of one menu to adjust the temperature or fan speed.” 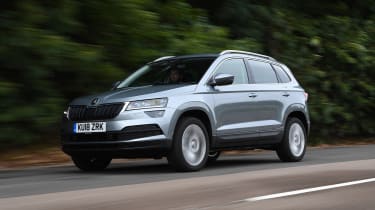 The Skoda Karoq is our reigning mid-size SUV champ, having knocked the Peugeot off its perch. But can the Karoq remain king, or do the 3008 and revised Tucson have what it takes to reign supreme? We test a £25,575 1.6 TDI Karoq SE L to find out.

The Karoq is characterised by its sharper responses. Compared with the soft, lethargic-feeling Tucson, the Skoda seems alert and more alive. The steering is more accurate than the Hyundai’s and better weighted than the light set-up in the Peugeot. It’s matched by a chassis that delivers a greater level of agility, because the slightly firmer suspension than in both rivals means there’s less roll and more comfort in corners as a result, thanks to the chassis remaining flatter.

Despite the extra control to the damping, it doesn’t feel harsh or overly firm. In fact, the suspension doesn’t drop into big depressions harshly like the 3008 sometimes does. It’s a little less settled than the other cars on washboard-like undulations, but the control is still there and it doesn’t feel too stiff. 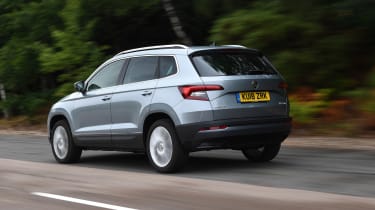 The engine is loud and less refined than the units in its rivals. However, performance is acceptable, even though the VW Group’s 1.6 TDI isn’t the best offering. Our performance figures are for a DSG model, and the 11.3-second 0-60mph time shows the Karoq is competitive. But while its in-gear times were comparable, this is a seven-speed model and the performance would be slightly more sluggish in the six-speed manual.

The car’s strengths lie in its balance of ride and handling rather than its engine, but this drawback isn’t too great to dent the appeal unduly. 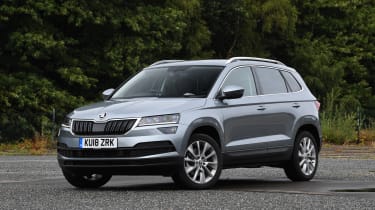 Skoda’s 1.6 TDI engine is the Karoq’s obvious drawback, but in every other respect this car is the best family SUV on sale today. While we’d still go for a 1.5 TSI petrol instead, this diesel offers solid performance and decent efficiency. The level of practicality, mix of comfort and dynamics, and the quality and kit on offer are unchanged, which is why the Karoq is still the king of this class. 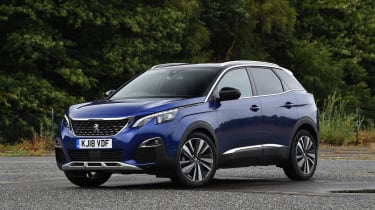 If the 3008 were more affordable it might have taken the win here, thanks to its better engine and lovely interior. It’s more than practical enough and will be cost-effective to run. Add to that comfort and kit, as well as respectable dynamics, and it’s a solid choice. But it’s pricier than the Karoq and doesn’t offer much in addition, which holds it back here. 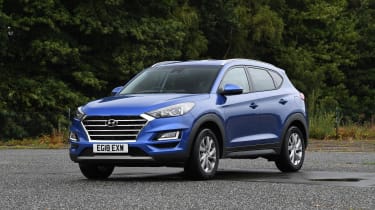 This new Tucson is an improvement, but the advances aren’t enough to overhaul the established and talented competition. Hyundai was once a budget brand, yet now it’s made it to the mainstream and bridged the gap to rivals, it’s failed to innovate and keep pace with progress. Although cars such as this updated Tucson are better, it still lacks the draw of the class’s best offerings. 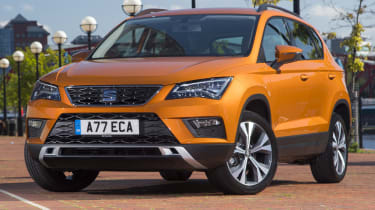 The Ateca uses the same underpinnings and engine as the Karoq, but it’s slightly sportier and more responsive to drive. Decent practicality and a good level of kit in SE Tech trim make this a crossover that should be on your list. 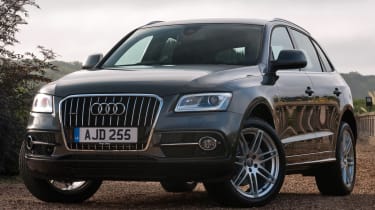 For the same money on the used market you could pick up a more powerful, more premium previous-generation Audi Q5 with around 30k miles. The 2.0 TDI engine is strong, plus there’s practicality and quality to like here.