The 2.2 diesel has been revised to improve efficiency 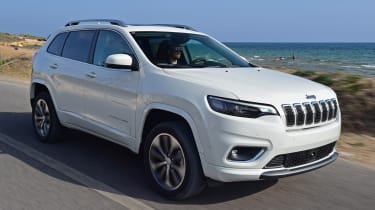 The thirsty V6 petrol Cherokee is no more, largely because it was a niche choice - 86 per cent of British customers have so far chosen diesel instead. The Cherokee’s 2.2-litre diesel engines make a case for erasing Jeep’s gas-guzzler reputation.

Fuel consumption for the updated car has yet to be determined, but the older model delivered claimed consumption of between 48.7mpg and 53.3mpg. This is on the old NEDC test cycle, but is around par for the class. The lighter, less friction-prone front-wheel drive model is the one to go for if running costs are the main worry. That car will also have the lowest CO2 emissions of any Cherokee.

Insurance groups for the pre-facelift Jeep Cherokee ranged from 26 to 29, which is about average for the mid-sized SUV class. Cheaper models like the Ford Kuga cost less in annual premiums, with groups ranging from 18 to 23 – but models like the BMW X3 will be considerably more. A top-spec BMW sits in group 43, due it is powerful 3.0-litre diesel engine and flash image.

Depreciation for the pre-facelift Cherokee is fairly consistent across the range, with all models (excluding the range-topping Trailhawk V6) posting residual values of around 30 per cent. Some of the lower-powered diesels manage to retain 35 per cent of their value, but the most expensive 197bhp Limited spec cars hover around 29-31 per cent.

Expect that to compare with the likes of Audi’s Q5 and you’ll be sorely disappointed. Often touted as one of the industry’s depreciation busters, all Q5s – including the high-power SQ5 – will be worth more than 50% of their original value after three years. A BMW X3 is very nearly as impressive, with all models retaining between 49% and 52%.