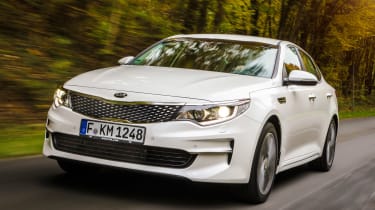 The Kia Optima is a car that won’t overly excite, but neither will it leave buyers feeling disappointed. It offers good levels of space and now better levels of quality and refinement. Some may rue the lack of engine choice but the single diesel engine offered will suit most buyers in this segment anyway. So long as driver involvement doesn’t rank as your top priority the Optima is certainly worth looking at.

Kia continues to perform well in the small car and crossover segments of the market, but its Optima saloon has struggled to gain ground in the busy family saloon class. Now the Korean company has a brand new Optima, tailored with European tastes in mind, and has focused on upping overall quality and refinement in a bid to boost the appeal of its flagship saloon.

Subtle changes to the exterior design do help to give the large Optima an appearance that has a more premium air to it, even if the style is more evolutionary than revolutionary. The ‘Tiger Nose’ front grille has been toned down and is now blended more into the headlights, with both topped by a chrome strip that is more than a little reminiscent of the current Volkswagen Passat. At the rear, you’ll now find slimmer and more angular lights, too. 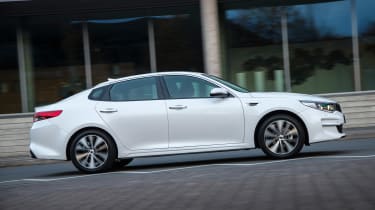 More noticeable and welcome are the changes to the interior that demonstrates a marked improvement over the outgoing model. An all-new dashboard noticeably enhances the cabin and should feature a seven-inch colour touchscreen as standard on entry and mid-level trims, growing to an eight-inch version on the top-level spec version.

Taking a number of styling cues from the latest Kia Sorento, the centre console has been simplified and looks all the better for it. Close attention has been paid to boosting quality, and the switchgear and materials certainly feel better. It isn’t quite at the same level as the premium German brands, but Kia has definitely closed the gap. 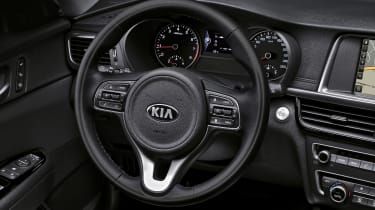 The 1.7-litre CRDi diesel engine remains the only option in the Optima line-up for now; in time there will be a plug-in hybrid and a 2.0-litre turbo petrol engine – the latter for a hotter GT model. The diesel’s power has been increased from 134 to 139bhp, torque has also seen a modest increase from 325 to 340Nm, but Kia has lowered emissions by 14 per cent to 110g/km in the case of our six-speed manual test car.

Gone is the inefficient six-speed automatic transmission of old and in its place is a new seven-speed dual-clutch automatic gearbox that brings with it a 40g/km reduction in CO2 emissions. This will be good news to fleet buyers and business users in particular. 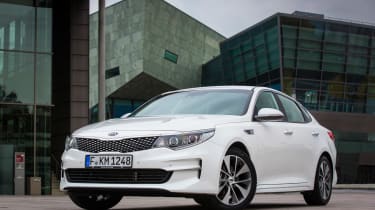 On the road the cabin is now a lot quieter even when the car is equipped with the larger 18-inch alloy wheels. Increased levels of sound-deadening materials serve to further isolate the 1.7-litre diesel’s rumble. The added performance of the diesel engine is welcome, helping the Optima feel a little more brisk. The bulk of torque is now available lower down in the rev range helping cut the 0-62mph time to 10 seconds.

One area that still has room for improvement is the manual gearbox. The throw between gears doesn’t feel as slick or precise as in some rivals, but at lower speeds the spread of gear ratios provides a more relaxed drive and it will happily plod along in slow moving traffic in second gear. A slicker option is the new seven-speed automatic that remains a smoother but costly option. 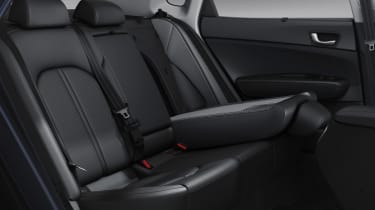 Beyond the confines of town driving the Optima feels much more composed at speed. This can be attributed to a revised suspension setup that also uses thicker cross member bushes to improve the ride quality.

In a bid to increase efficiency the setup of the power steering has been changed to a rack-mounted electric motor system although this has done little to enhance the overall feedback through the steering wheel. At a variety of speeds it’s just that bit too light to the touch and lacks any real feeling of connection to the front axle.

The Optima is certainly a better car than before for these changes but it stops short of delivering a really top-notch package that can seriously rival the bigger players in this highly competitive segment of the market. As an alternative to the mainstream it's a more sensible choice than it once was and, as ever, a stylish one.