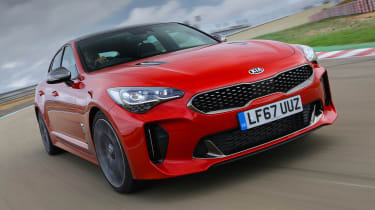 The Stinger GT has delivered on the promise of Kia’s racier-looking four-door coupe. It’s a solid first effort at a sporting family car that proves the Korean brand is heading in a positive direction. It’s not without its drawbacks, but in its most potent GT-S guise the Stinger is an individual choice that can compete on merit in certain areas with its German rivals.

Kia has already proven it can sell a £40,000-plus SUV with its seven-seat Sorento, changing perceptions of the firm from value-focused and practical to a desirable brand in its own right. But a £40,000 sports saloon is an entirely different proposition.

Enter the Stinger GT-S, a 365bhp 3.3-litre twin-turbo V6 with power, potential and looks to rival the likes of Audi’s S5 Sportback. Non S-spec four-cylinder petrol and diesel models will be available, too.

While it might have the performance to rival the S5, with prices starting from £40,495 it undercuts it by around £7,000. Kia’s head of Vehicle Test and High Performance Development Albert Biermann told Auto Express earlier this year that the Stinger GT-S has “to surprise people and change perceptions of the brand.” 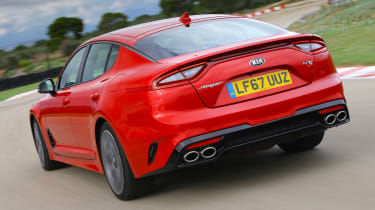 And it could live up to its billing, because the Stinger is a genuinely characterful car with plenty of performance.

However, it’s about so much more than the raw figures. The engine revs with nice progression and responds well to the throttle, with little turbo lag. In the Sport or Sport+ driving modes it growls with some purpose, and while it’s never intrusive like some enhanced engine notes, it’s not the most exciting.

The bulk of the performance is in the mid range thanks to those turbos, but it’s rewarding to rev it out and take manual control of the eight-speed automatic gearbox.

In Comfort the transmission self-shifts smoothly, using the torque and changing up early. Use the steering wheel paddles in the sportier settings and it’s not as smooth as the best from Audi or BMW, but this is Kia’s first effort at a performance GT don’t forget – so there’s lots to commend. 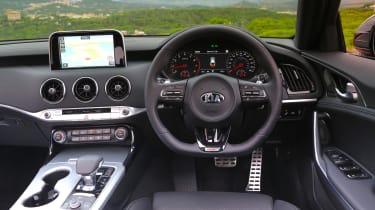 Notably, the chassis falls into this category. All UK cars will be rear-wheel drive and get a limited-slip differential, which helps make the car feel surprisingly agile on the road given its size.

Get on the power from the apex and the clever system works the diff to tighten the car’s line and give plenty of reassuring traction. The steering still doesn’t have much feel, but it is well weighted and precise enough to make the most of the available grip. There’s quite a lot, too, and although the Stinger sometimes feels its 1,780kg kerbweight, that mass helps key the tyres into the tarmac.

Adaptive dampers are standard for the Stinger GT-S and work in tune with the different driving modes. On admittedly smooth Spanish roads the Stinger felt compliant in Comfort, and although the body is better tied down in Sport and Sport+, it still retains a lot of its composure and a refined edge to the chassis control. Small patches of ruffled tarmac highlighted this positive trait, but we’ll have to wait and see if the car can deal with ridged UK roads as well.

What’s not in question is the Kia’s list of standard kit. An eight-inch touchscreen with sat-nav, Apple CarPlay and Android Auto is standard, as is Bluetooth, all-round parking sensors and a 360-degree monitor, a head-up display and a Harman/Kardon hi-fi. Heated and vented front seats are included, too. 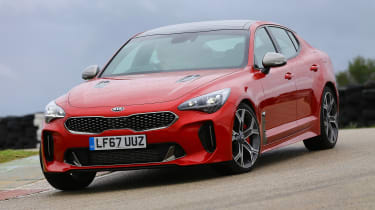 This equipment is nicely integrated, and in GT-S spec the Stinger is the slickest and best handling Kia we’ve seen yet. It’s fair to say the styling cues both inside and out draw inspiration from some rivals, but it’s an attractive car that boasts a nicely finished cabin, balancing this with plenty of practicality.

The front is roomy and you can find a nice driving position, while the rear bench offers adequate legroom for even taller adults. Despite the coupe-like roofline you won’t struggle for headroom, either.

The 406-litre load bay is big and usability is boosted by the electric hatchback. However, people might be put off by claimed efficiency of 28.5mpg and 225g/km CO2. The diesel should offer all the same style and practicality, while costing much less to run, however.

If you can look past a few of the Stinger’s flaws though, you’ll find a nicely judged and well finished fast road car with space for the family, but importantly, one that’s now entertaining enough to drive, too.