We get to grips with Lotus' harder, faster, supercharged flagship. 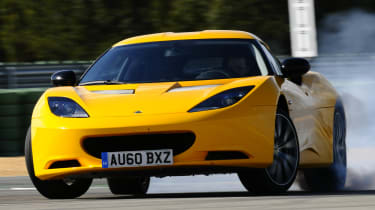 At last, the Evora now has the performance to match its incredible chassis. It’s a car that proves Lotus still leads the way when it comes to handling - for enthusiasts there can be few more rewarding cars to drive. But while the leather-clad cabin is easily the best that Lotus currently builds, the occasional rattle and third-party components mean it lags behind rivals for quality. It would be brave man to chose an Evora S when for the same money you can have a Cayman plus change, but a car this good deserves to succeed.

We all know Lotus has ambitious plans in the pipeline, but the existing line-up is still going strong. And the Evora S is the new pinnacle of the current crop – featuring a supercharged version of the standard car’s 3.5-litre V6 for Porsche-beating performance.

The headline figures speak for themselves. And extra 70bhp takes the tally to 345bhp and 400Nm of torque – comfortably eclipsing the Cayman S. A 0-62mph sprint in 4.8 seconds also outmanoeuvres the German car, while combined fuel economy from the Toyota-sourced V6 is a respectable 27.7mpg.

But it’s the way that the Evora S delivers its power that’s so impressive. A wide spread of torque from 2,00rpm right to the 7,200rpm redline ensures relentless acceleration and instant throttle response, both of which help it to feel noticeably quicker and more alive than the standard car.

It sounds even meaner, too. The supercharger whine is audible, but it can’t ruin the spectacular soundtrack coming from behind your head. Fitted as standard to the ‘S’ is an active exhaust which opens a set of valves in the exhaust above 4,700rpm to increase the volume, although our car was fitted with the optional sports exhaust which turns the volume up to maximum at all times.

Front and rear suspension bushes have been stiffened by 10 per cent, but despite its tighter body control in the bends, the S still rides beautifully, meaning the Evora can realistically be used as a long distance companion. Steering weight has been increased marginally, but the wheel is still brimming with feedback, while the uprated brakes proved remarkably fade-free even after several quick laps on track.

Other tweaks include a more-prominent rear diffuser, new optional alloy wheels – 20-inch at the rear, 19-inch at the front – and a sport button, which sharpens throttle response and loosens the traction control. The six-speed manual gearbox has also been reworked - the result is a more positive, mechanical feel to the shift.

The Evora S is sublime to drive whether on a road or a track and a fitting flagship for Lotus’ line-up. But with prices starting from just under £60,000 and potentially a whole lot more with a few choice options fitted, it’s destined to be a car you buy with your heart and not your head – especially considering the pedigree and competitive pricing of its rivals.

Rival: Porsche Cayman S While neither the exterior nor interior of the Porsche is particularly flamboyant, every control is precisely weighted and delivers feedback right back to the driver. Twice voted Auto express performance car of the year, the Cayman is an absorbing experience for novices and track-day enthusiasts alike.