Supercharged-flagship Evora S takes aim at Porsche Cayman - we drive it on UK roads for the first time to see if it has what it takes. 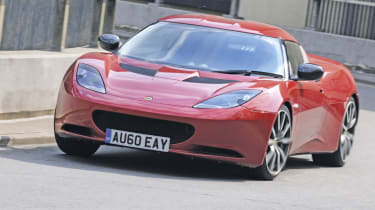 The Evora S is a fantastic car. It’s perfectly suited to twisty B-roads and race tracks, with an incredibly compliant ride making it surprisingly comfortable, too. The newcomer is also much improved around town, thanks to a broader spread of torque. It’s only let down in this area by a heavy clutch pedal. But the Lotus’s questionable build quality and a confusing media interface could leave a bitter taste for buyers, who will be spending upwards of £60,000 with options.

Is this the model that finally moves the Evora into the sports car premier league? In our eyes, the standard car has always played second fiddle to Porsche’s Cayman, but with a supercharger and even more power, the Evora S is now aiming to step out of its German rival’s shadow.

A quick look at the figures shows early promise. With a supercharger fitted to the Toyota-sourced 3.5-litre V6, the Evora now produces 345bhp – an increase of 70bhp. That’s enough to propel the Lotus from 0-62mph in 4.8 seconds, one-tenth quicker than the Cayman S fitted with the optional Sport Plus package. It’s now more usable on a day-to-day basis, too, with torque spread between 2,000rpm and 7,200rpm. That makes town driving more relaxing than in the standard car, although the heavy clutch pedal can make negotiating stop-start traffic a bit of a chore. Once out of the city, though, the Evora S really begins to shine.

The engine note has improved even further with the addition of the whirring supercharger, and our optional sports exhaust increases the volume at the touch of a button. Pressing ‘Sport’ also raises the rev limiter to 7,200rpm and sharpens throttle responses.

Lotus engineers have also stiffened the front and rear suspension bushes, upgraded the brakes and added a little weight to the steering. The changes combine to make the Evora S one of the best handling cars on the road, with huge amounts of feedback and pinpoint accurate steering. It also rides incredibly well, too.

Some of the Lotus quirks remain, though. The aluminium buttons and accents look fantastic, but build quality is still a concern – our test car sported a loose gearknob and a confusing sat-nav system.

It’s not practical, either, with the tiny boot only big enough for a few shopping bags. Opt for the two-seat layout, and you’ll end up throwing things on to the rear shelf instead. A minuscule rear windscreen makes the optional reversing camera essential.

Nevertheless, Evora S buyers will be willing to make these sacrifices knowing that they’ll be rewarded with one of the finest driver’s cars available. It’s worth noting, though, that even without options, the Evora’s £57,550 price is around £10,000 more than the Cayman S’s – a difference large enough to cast a shadow over the Lotus’s success.

Rival: Porsche Cayman S Dynamically, there’s very little to separate the two cars, but the Porsche trumps the Lotus for build quality, practicality and usability. The Lotus may be the more appealing car for a quick back-road blast, but to live with on a daily basis, the Cayman wins hands down.