The next instalment in our top 10 Most Wanted Cars is a new version of the Mazda RX-7. This is how it could look… 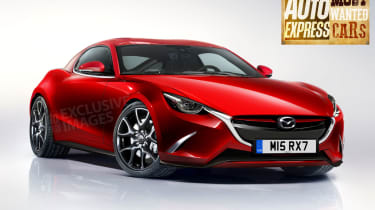 The old RX-7 was around for nearly 25 years before it was axed from the range back in 2002 – so it’s understandable that it attracted a loyal enough following among our readers to finish an impressive fifth in our Most Wanted poll. And it’s perhaps surprising that Mazda hasn’t already come up with an RX-7 fit for the 21st century.

It remains one of the few classic sports cars to emerge from Japan and ever since its launch it has stayed faithful to the Wankel rotary engine. At 1.3-litres, the engine was smaller than some powertrains you’ll find fitted to superminis in today’s market but the RX-7 also employed sequential twin turbocharging to give an almighty power boost.

The rotary unit was the only engine on offer and developed around 250bhp, which was deployed to the road via the rear-wheels. Gearbox options included a four-speed automatic and five-speed manual.

The RX-7’s fierce popularity and strong enthusiast following raises the question as to why Mazda has not yet considered reviving the famous moniker. However, Auto Express recently revealed Mazda is in fact in the early stages of development of a direct successor to the RX-7.

Our exclusive inside line revealed Mazda will stick with the Wankel rotary engine and target around 300bhp by implementing its latest SkyActiv technology. It will also be based on the upcoming Mazda MX-5 platform and be larger than the four-seater RX-8 which was discontinued in 2010.

The reborn icon could arrive as soon as 2017 and Mazda could opt to use the low-slung two-door coupe body of the original RX-7 rather than the four-door configuration of the RX-8 in order to shed weight.

We don’t have any official pictures yet, so our exclusive image will have to whet your appetite for now. When we asked, a Mazda spokeswoman told us: “We can only live in hope, but there is no word from Mazda HQ about any RX-7 plans.” 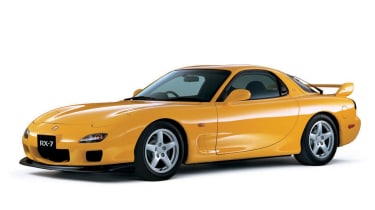 The first generation Mazda RX-7 arrived in 1978 as a replacement for the Savanna RX-3. Just like the RX-3, the car was called the Savanna RX-7 in its home market.

The RX-7 mk1 was powered by a 1.1-litre Wankel rotary engine and had a front-engined rear-wheel-drive layout that would set the template for three more RX-7 generations.

The RX-7 was getting serious and by 1989 a facelift brought updated styling, improved engine management technology and a higher compression ratio seeing the RX-7 Turbo model to 200bhp.

The car still tended towards the softer end of the sports car market - there was even a convertible version from 1988 onwards. It wasn’t until the third generation RX-7 showed up in 1991 that its reputation as a performance car would be cemented.

The unit in the Mazda RX-7 mk3 was a sequential twin-turbocharged rotary engine with a 252bhp output that was increased to 276bhp by the time the plug was pulled in 2002.

Don't forget to tell us what you think of the idea of a new Mazda RX-7 on Twitter, on Facebook or in the comments section below...