The next model in our 10 Most Wanted Cars feature is a mini MINI, a car to take the brand back to its roots. Here’s how it could look… 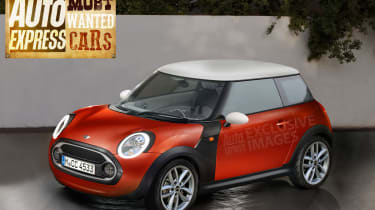 In days gone by the Mini – as the name suggests – was a miniscule British city car that was cheap to make and buy. Sales were initially slow, but the Mk I’s fame grew throughout the Sixties, winning over the public and celebrities alike. When we asked our readers which fantasy car they most wanted to see built, an old school mini MINI was a big favourite.

The MINI brand is, of course, now owned by BMW and the first new BMW MINI launched back in 2000. It followed the original by going from strength to strength but has expanded in size over the years, moving away from the core values of its ancestor.

A growing MINI line-up that includes a crossover, estate and Coupe/Roadster has helped boost sales, but aficionados continue to point out the lack of a true mini MINI city car in the current range. 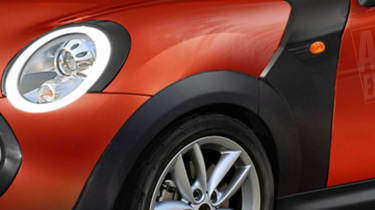 This dream model would take the brand back to its roots, reducing size and weight to closely match the original. Despite clear public interest, so far the closest our collective wish has come to reality was when the MINI Rocketman concept appeared at 2011’s Geneva Motor Show.

At 3,419mm long and 1,907mm wide, the baby MINI Rocketman was about 40cm longer and 50cm wider than the original – despite the small dimensions, there was apparently room for four adults thanks to a clever seating layout. Getting in and out was made a whole lot easier too, owing to the double-hinged doors that allowed for a wider opening.

While the firm had stated a commitment to making sure its concepts reached production, the plan was sadly canned due to high costs, although it still provides the best insight into how such a new model might look.

If technical and financial issues can be resolved at some point in the not-too-distant future, there’s no reason why a mini MINI couldn’t be a huge sales hit. The brand hinted at a compact city car with its Rocketman concept in 2011, but a spokesman has told us a production version is unlikely, adding: “It was nothing more than a concept car.” 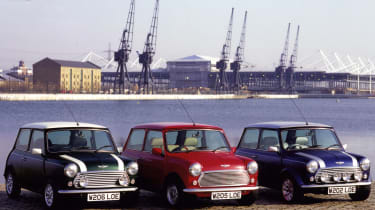 The Mini is one of the most loved cars the world has ever seen with its effervescent character and the unmistakable lines by Sir Alex Issigonis carving it a permanent niche in global popular culture.

The little car’s soaring popularity also contributed to an epic production run that saw the first Mini roll off the line in 1959 under the stewardship of BMC and the last built by Rover in 2000.

There are three core Mini variants, the Mk1 car was built until 1967 when the Mk2 took over with largely cosmetic alterations. Around 429,000 Mk2 Minis were built up until the Mk3 was launched in 1969.

The Mk3 was a much more comprehensive refresh with larger doors to aid access and wind-down windows in place of the sliding items on the early cars. There were also further packages of changes brought in 1976 (Mk4), 1984 (Mk5), 1990 (Mk6) and 1996 (Mk7) but none strayed too far from the original Mini design. The last Mini was built at Longbridge in 2000.

Don't forget to tell us what you think of the idea of a new Mini on Twitter, on Facebook or in the comments section below...