The new Mazda CX-30 compact crossover is based on the impressive 3 hatchback, but is the SkyActiv-G GT Sport model as good on the road? 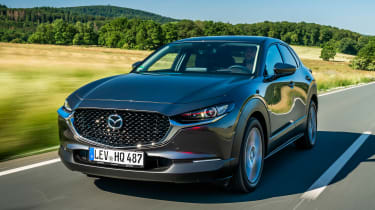 Much like the new Mazda 3 hatchback, the CX-30 is a good car lacking a good petrol engine. However, we’re told that the 178bhp SkyActiv-X motor will be available when the car arrives in November, and it should go some way to addressing this. Interior quality surpasses that of most mainstream rivals, and the CX-30 is good to drive, but there are more practical options.

This is the car that could become Mazda’s best-seller in Europe. It’s the new CX-30, a compact crossover that slots into the gap between the CX-3 and the CX-5.

So why isn’t it called the CX-4, you ask? That already exists as a car for the Chinese market and is a different proposition, while this newcomer is looking to build on the momentum established by its hatchback sibling: the recently launched new Mazda 3.

Sizing up at 4,395mm long and 1,795mm wide, the CX-30 slots neatly into the compact crossover class, being just a little bit larger than the Volkswagen T-Roc, fairly similar in size to the Range Rover Evoque, and just a little bit smaller than the chunky Volvo XC40. But there really is no end to the list of rivals this new car faces; the Toyota C-HR, Mercedes GLA, Peugeot 3008 and more line up against it. 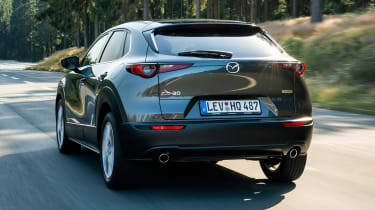 On closer inspection it’s certainly more than just a Mazda 3 on stilts. The bodywork is all new and subtly different, with a more practical rear third to go with the rugged-looking black cladding that lines the sills and wheelarches. Other than that, though, this car uses the same platform as the 3 and is being launched with the same engines: a 114bhp 1.8-litre SkyActiv-D diesel and a 120bhp SkyActiv-G 2.0-litre petrol, as driven here with a six-speed automatic gearbox. The new SkyActiv-X compression-ignition petrol engine will also be available when the CX-30 arrives in dealers in November, we’re told.

Inside, the layout of the dashboard and switchgear is similar to that of the Mazda 3, save for a bit of extra padding on the top of the facia. This is good news; the new 3 wowed us with its level of perceived quality when we first drove it, and it’s the same case here. Materials are strong and high-quality, switches operate satisfyingly and are logically laid out, and the new 8.8-inch infotainment display is sharp and easy to use. Overall, the CX-30 definitely steps on the toes of premium rivals for luxury, and leaves behind its more mainstream rivals.

There’s plenty of space up front, and Mazda has nailed the CX-30’s driving position. However, a tall passenger sitting behind a tall driver may find legroom a little restricted, and the transmission tunnel is quite high, limiting legroom in the middle seat. The boot opening is wide and tall, but with all seats in place the capacity is 430 litres – considerably less than you’d find in, say, a Skoda Karoq.

Get behind the wheel and the CX-30 feels every bit as strong as the 3 – although this isn’t down to the engine. The modest torque of the 120bhp SkyActiv-G means progress is a little lacklustre, with 11.2 seconds needed to hit 62mph from a standstill. On hilly roads the auto gearbox keeps the engine in the higher reaches of the rev-band, spoiling its otherwise impressive refinement. We’d stick with the excellent sharp-shifting six-speed manual gearbox in any case. 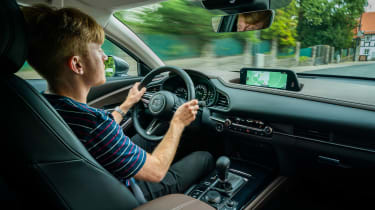 The torque of the diesel could be a tempting remedy for many, but thankfully the CX-30 is a crossover suited to carrying its momentum. With the raised ride height, there’s more body roll than in the 3, yet the basic strengths of that car’s chassis remain, along with accurate, well weighted steering.

At speed, the ride smooths out nicely and the engine is very quiet at a motorway cruise, making it relaxing away from the bends. But our test car’s damping seemed a little too keen to transmit judders into the cabin at low speeds in town.

We’ll find out about UK specs and prices shortly, but we’re told that the line-up will strongly mirror that of the 3. If so, expect good levels of standard equipment for the money. But remember, the CX-30’s rivals may not feature such impressively executed interiors or solid dynamics, yet almost all of them offer torquier, more powerful turbocharged engines.