The C-Class offers a good amount of room up front for driver and passenger, but the boot size is nothing special

Up front, there’s lots of space in the comfortable seats, with plenty of head- and legroom. The driving position is better aligned now, too, and visibility is good.

There’s plenty of space in the doors and dash to store the usual on-board clutter, including a large glovebox, door bins and a lidded cubby between the front seats. The rear armrest also incorporates two cup-holders. With all models including a media interface for connecting your smartphone to the car.

It doesn’t take long with a tape measure to realise that Mercedes used the BMW 3 Series and Audi A4 as benchmarks when designing the C-Class. All three cars provide similar amounts of head- and legroom for rear-seat passengers, plus they have identical 480-litre boot capacities in saloon guise.

Against the tape measure, the C-Class saloon measures up at 4,686mm long, 1,442mm tall and 1,810mm wide, with the total span of the car with mirrors folded out being 2,020mm. AMG models are slightly longer, less tall and a little wider given their lower suspension setups and more imposing, sporty bodywork. 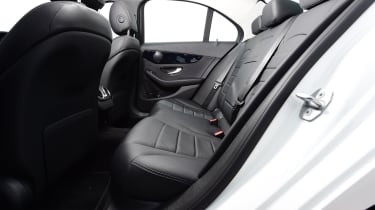 Space in the front seats is generous and there’s more than a meter of headroom in either saloon or estate, with 1,039mm in the four-door and 1,046mm in the wagon.

The estate’s higher roofline does help with rear headroom, raising it to 974mm compared to 942mm in the saloon. But legroom in the back is a healthy 686mm in both cars and – coupled with the Mercedes’ large rear doors – this makes access to the back row of seats easy. All C-Class models have Isofix seat points in the rear. The Coupe naturally has less room in the rear but is spacious enough for adults on short journeys.

The size of the boot in the back of the saloon varies depending on which powertrain you opt for. For instance, you’ll get 455 litres in all diesels with all seats in place.

Most petrol powered cars also feature a 455-litre boot, though the C 200 dips to 435 litres owing to the 48-volt mild hybrid system, and the C 63 model records the same deficit in space. And, even though the boot floor is flat, there’s no under-floor storage. Overall, it’s good enough to live with but there are more practical compact executive options out there.