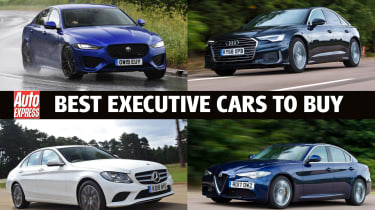 ‘Executive car’ has come to be something of a catch-all phrase, covering an expansive group of prestige models. There probably aren't enough executive jobs to go round to justify the number of executive cars for sale in the sector, and as well as ferrying captains of industry, you'll find many of these executive models doing trade as private hire vehicles for airport runs or in towns and cities across the UK.

Rewind about 20-30 years, and an executive car would've been simple to classify. You had a choice of three German makers – Audi, BMW or Mercedes – and you had large or small body styles. Audi had the A4 and A6, BMW the 3 Series and 5 Series and Mercedes had the C-Class and E-Class. Beyond that, there was Jaguar, Volvo and Saab, or if you liked to burn money, there were heavily depreciating and unreliable options from Citroen, Peugeot, Renault and Alfa Romeo.

Today the German brands continue to dominate, but the lines that define the rest of the sector have become blurred. Plenty of mainstream manufacturers offer large saloons and hatchbacks that lay claim to ‘executive car levels of comfort and refinement’ with some justification. Peugeot’s 508, VW’s Passat, Vauxhall’s Insignia Grand Sport and Skoda’s Superb all offer the class without the premium badge. Then there’s Jaguar, a more influential player these days, and a strongly resurgent Volvo. Lexus and Infiniti continue to strive to replicate their success elsewhere in the Europen market while Alfa Romeo is also on the comeback trail.

Even without dipping into the SUV and crossover class, there are more body styles available to the executive car buyer than ever. As well as the traditional saloons, there are the usual estate versions on offer and beyond that things start to get interesting. Two-door coupes like the Audi A5 Coupe, Merc C-Class Coupe and BMW 4 Series offer the same range of engines as their saloon counterparts, but  look sharper and have similar tax and running costs. These also come in convertible guise for open-air motoring.

Then there's the rise of the four or five-door coupe, typified by cars like the Mercedes CLS, Audi A5 and A7 Sportbacks and BMW 4 Series Gran Coupe. The oddball BMW 3 Series and 5 Series GTs are five-door hatch versions of the saloons, too.

Most of these cars will still be diesel powered (although Lexus does not offer diesels), but more efficient turbo petrol engines are now being offered. Plug-in hybrid models like the BMW 330e and Volkswagen Passat GTE can really cut your overheads, too. If you're willing to take the plunge, the Tesla Model S is a unique executive – it has zero-emissions electric drive, supercar-rivalling straight-line performance, acres of space and super-low everyday running costs.

But which cars do we think are the outstanding executive choices? We've listed 10 of our favourites below, although alternative body styles should always be considered if you really want something different that helps you stand out in the company car park.

Read more of our best car recommendations below...