The C-Class remains a solid, stable cruiser, although new engines are an improvement, and AMG offerings are still huge fun

This C-Class was the first car to be built using Mercedes’ new rear-wheel drive architecture (called MRA). This employs around 50% aluminium in its construction – up from 10% before – and cuts 70kg from the body. Other weight savings mean the C-Class weighs around 100kg less than its predecessor, which helps improve the driving experience and efficiency.

The standard suspension offers a comfortable ride if you stick to 17-inch wheels. The £895 Airmatic Dynamic Handling package adds air suspension. It brings another dimension to the way the car rides, easing off some of the harsher low speed bumps you’d otherwise feel strongly in the cabin. It’s only available as an option on Sport and AMG Line models, however, not on the basic, and otherwise well equipped, SE.

The car’s steering is pleasingly direct and well weighted, giving the C-Class a sense of agility at the front, though like many modern electric power steering systems it lacks on road feel. Selecting Sport+ mode sharpens the throttle, adds weight to the steering and stiffens the dampers, but the Mercedes’ front tyres start to lose grip more easily than we’d like. Plus, the firmer Airmatic suspension setting this triggers causes the car to feel skittish over mid-corner bumps. On a good surface, this is a composed car to drive though, and it’s a very well attuned motorway cruiser too. 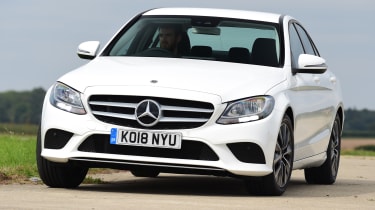 First up of the two performance models is the half-fat four-wheel-drive V6-powered C 43. It can't match the firepower of its more potent C 63 S sibling, but it's not short on grunt, very comfortable and stable at pace, and the six-cylinder engine sounds charismatic enough. It's easier to drive, too, thanks to its superior traction. As a point-to-point machine it’s highly competent and superbly polished, if a little undramatic.

The C 63 S is the true drivers' car. AMG has worked hard on the suspension and steering, to deliver the sort of composure and engagement that drivers of the standard C-Class can only dream of. For the ultimate AMG C-Class experience though, drivers should head towards the Coupe models as they have their own bespoke rear axle and suspension settings.

The Mercedes C-Class’s entry-level slot is occupied by the 154bhp 1.6-litre turbo C 180 petrol – a model re-introduced to the UK with this facelift to pick up declining diesel sales. It’s available in S and SE trim levels with a six-speed manual gearbox as standard, with the option of a nine-speed automatic in SE trim only.

Petrol buyers may want to look to the C 200 model though, which uses an all-new, turbocharged 1.5-litre four-cylinder 48-volt mild hybrid setup. There’s 181bhp on tap plus engine shut-down and coast capabilities. 181bhp is more than enough to hustle the C-Class along at a respectable rate, with 0-62mph completed in 7.7 seconds. The 48-volt engine cut-out works seamlessly for fuel-free and almost undetectable coasting on motorways, helping to keep the model’s CO2 figure down.

A smooth nine-speed automatic gearbox is standard fit, and our only real gripe with the C200 is that it could be a bit more refined – accelerating through the gears to get up to motorway speed is a little noisy. A 4MATIC all-wheel-drive version is also available.

Before you hit the six-and eight-cylinder AMG models the four-cylinder petrol line-up tops out at the C 300, offered in AMG Line Edition or AMG Line Night Edition Premium trim. With 254bhp and 370Nm torque available from a turbocharged 2.0-litre engine, 0-62mph comes up in a very respectable 5.9 seconds, and it’s done with little fuss and a great deal of refinement. It feels like a wonderful package but will be a rare sight on roads compared to the more frugal and cheaper C 200 model, which is our pick of the four-cylinder petrols.

The entry-level C 200 d has been dropped, making the  C 220 d the base diesel model in the C-Class line-up. Power comes in at 191bhp with 400Nm of torque available from as low as 1,600Nm. It’s an engine we’ve long waited for in the C-Class – the old 2.1-litre unit used in the C 220 d was far from perfect and very gruff. While the new 2.0-litre isn’t as refined as it is in the larger E-Class, it’s a big improvement and will probably be the best selling engine.

The C 220 d is equipped with a nine-speed automatic gearbox as standard and is available across all three trim levels. A 4MATIC all-wheel-drive version is offered in AMG Line trim only.

At the top end of the diesel line-up, the C 300 d is a more potent version of the 2.0-litre C 220 d, featuring 242bhp and an impressive 500Nm of torque. Much like the C 300 petrol it’s an extremely convincing proposition behind the wheel, but makes less sense when it comes to buying price and running costs – the 4MATIC version pops in at over £40,000 on the road, for example.

Two plug-in hybrid powertrains are also offered; a petrol-driven version called the C 300 e and a diesel model called the C 300 de. We’ve only driven the latter so far, and we’re happy to report that it’s perfectly civilised. It blends Mercedes’s latest 2.0-litre four-cylinder diesel with an electric motor, producing a combined output of 302bhp and 700Nm of torque.

This makes the C 300 de good for a 0-62mph sprint of 5.7 seconds and a top speed of 155mph. Even more impressively, it will travel at speeds in excess of 80mph on electric power only and, if driven more economically, will cover more than 35 miles without using the combustion engine at all.

Completing the range are the two AMG-tuned cars. The lesser C 43 features a 385bhp bi-turbo V6 mated to Merc's excellent nine-speed gearbox and four-wheel drive. The saloon will race to 62mph in 4.7 seconds, while the Estate is one tenth slower over the benchmark sprint.