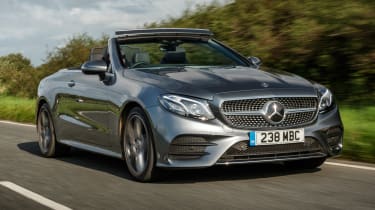 This range-topping Mercedes E 400 is simply too expensive to be the sweet spot of the E-Class Cabriolet line-up, but it has plenty of appeal regardless. It gets a great cabin, excellent top-down cruising refinement and impressive levels of comfort. The torquey diesel-powered E 220 d is expected to be the biggest seller, though, and we can see why, given that it’s only slightly slower in the real world, while also being much cheaper to buy and run.

Summer’s officially over, but that’s unlikely to stop UK buyers from snapping up convertibles in their droves; despite our climate, we buy more drop-tops than the French, Italians and the Spanish.

Mercedes has long enjoyed a slice of this market with cars like the E-Class Cabriolet. The new model is available with two petrol and two diesel engines, and now we’ve had a chance to try the range-topping E 400 4MATIC AMG Line on UK roads.

As in the E-Class Coupe, the E 400 badge signifies V6 power – more precisely, a 3.0-litre twin-turbo unit that we’ve also seen (in more potent form) in the AMG E 43. In this E 400 it has 328bhp and 480Nm of torque, which sounds hefty until you realise that the extra strengthening required to hold the roofless E-Class together has given it a kerbweight of 1,800kg. Lightweight it is not. 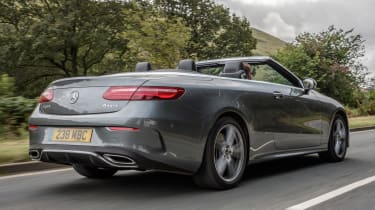 So step on the throttle and you’ll find that the E 400 gathers pace with haste rather than in a genuine hurry. It has a claimed 0-62mph time of 5.5 seconds and it just about feels that fast. But the sensation is numbed by the sublime smoothness of the engine, which doesn’t have the subtle rasp that it possesses in E 43 form.

Once you’re up and moving, the E 400 Cabriolet maintains its refusal to get flustered – but this brings both positives and negatives. It is incredibly refined; at a fast motorway cruise the nine-speed automatic gearbox barely needs 1,200rpm from the motor, and you simply won’t hear it at that level. This cruising ability is helped further by a multi-layer fabric roof that delivers impressive levels of insulation.

On the downside, the E-Class Cabriolet is far from involving to drive – in the traditional sense, at least. It doesn’t roll excessively, and the steering is responsive enough, but there’s not much fun to be had from a four-wheel-drive chassis that is clearly designed to be faithful to inputs, instead of delivering any kind of thrills. It’s composed almost to the point of banality, in other words.

The ride quality contributes to this, of course. On standard 19-inch wheels, it’s comfortable over all but the roughest roads, and is helped by air-suspension that’s standard on the E 400. Lower the roof and you’ll detect a teeny bit of extra wobble over poorer surfaces, but you’d be nit-picking if you found it a deal-breaker. The cabin stays calm with the lid off, too; you’ll be able to talk to rear-seat occupants without having to shout, and those in the front two seats should be able to chat to each other without turning up the volume at all. 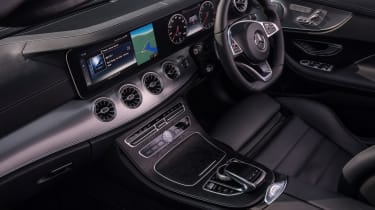 The biggest noise, in fact, comes from the Aircap deflector that pops up from the windscreen. It’s designed to keep buffeting to a minimum, but we’d simply tuck it away. The E 400 also gets Airscarf – warm air blowers in the front headrests that keep your neck warm if you want to drive with the roof down on an autumnal British morning.

The cabin, meanwhile, is every bit as much of a tour de force as it is in the regular E-Class. Material quality is impressive, as is the view from the driver’s seat, with a thick-rimmed steering wheel and a pair of digital displays. Our car had the optional 12.3-inch digital instrument panel, which adds an extra level of luxury – we reckon it’s worth the £495 outlay for the additional screen space and configurability that it offers. Both screens are ultra-crisp and quick to respond to inputs once you’ve acclimatised to Merc’s function-filled COMAND interface, too.

There’s plenty of room for two adults and a couple of kids, although grown-ups are likely to find the rear a little restrictive for longer journeys. The boot is a decent size with the roof up, at 385 litres, which should be enough for a suitcase and a couple of squishy overnight bags. That means you should be able to get to the south of France in comfort, ditch the luggage and then cruise around in fresh-air style – the epitome of what Mercedes’ Cabriolets are about.