V6-powered AMG E-Class Estate is fast and practical, if lacking a little sparkle 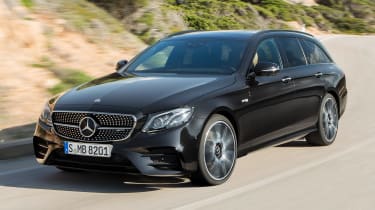 The Mercedes-AMG E 43 is just as fast, comfortable and good-to-drive as the saloon version, but gets an even bigger boot thanks to its more practical body shape. That’s great news for those looking for a fast, competent load lugger that’s great all year round. It’s a top all-rounder, but just lacks the character of the best AMG models.

Until the E 63 Estate appears later this year, the Mercedes-AMG E 43 is the fastest load-lugger in the excellent E-Class range. It has fewer direct rivals than its saloon brother, though both take on the Audi S6 in its various forms.

As with the saloon, the E 43 uses a turbocharged 3.0-litre V6 with 396bhp and 520Nm of torque. The 0-62mph sprint takes just 4.7 seconds thanks in part to the 4MATIC all-wheel drive system, which is driven through a nine-speed automatic gearbox.

While the grip from a standstill means the 0-62mph time is quite incredible, it doesn’t feel as rapid as it sounds on the road. It’s definitely not wanting for pace, though, with loads of torque low down in the rev range and plenty more the harder you rev it. It’s not the most characterful engine, but if you can look past that it’s a very competent unit that sends the E 43 rocketing across the tarmac.

The nine-speed automatic gearbox is a tweaked version of the one seen in all other E-Class models – and it’s a great box for normal driving. It shifts quickly and smoothly in auto mode, and similarly well most of the time when using the paddles behind the wheel. However if you shift too close to the redline there’s sometimes a lurch as the shift is mistimed and you hit the limiter. 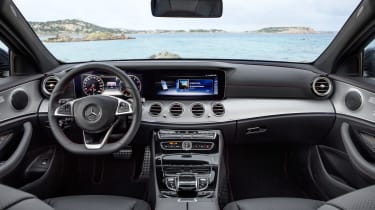 The four-wheel drive powertrain means there’s lots of grip available, making it a great all-weather performance car. Despite feeling quite big on the road, it’s pretty agile, with decent steering weight in the Sport setting. The E-Class weighs nearly two tonnes, though, meaning while it’s a very competent performance car, it’s not massively enjoyable to drive.

Despite the weight and sporty focus, the E 43 still rides well in the UK – as the adaptive suspension means you can set it to Comfort mode and glide over imperfections in the road. It’s a superb cruiser, with longer trips a real strength of the E-Class range.

The Estate version is also all about practicality, and the 640-litre boot (1,820 litres with the seats down) is huge. It will easily manage a family trip through Europe with all your luggage, though if trips like that are on the cards you might be better off with the E350d diesel, as the E 43’s petrol V6 is thirsty. 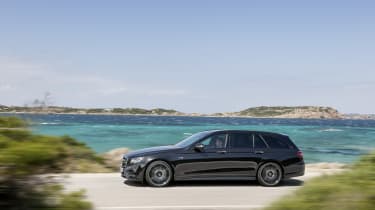 The Mercedes also has one of the best cabins in its class, with the excellent materials, comfortable seats and modern 12.3-inch twin display screens. The semi-autonomous Drive Pilot tech is available too, which can help make long motorway trips easier, as well as driving in traffic.