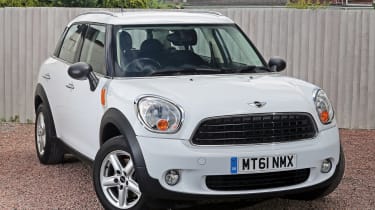 The Countryman notched up several firsts for MINI, because never before had the brand offered a car with five doors or 4WD. The model opened up new markets for the firm, thanks to buyers who wanted to stay with MINI but found the hatch too cramped. As with all MINIs the Countryman doesn’t offer the best value in its segment, but that isn’t what BMW is about. However, if you’re expecting something that’s class-leading to drive, you’ll be disappointed on that score, too. What you’ll like a lot more is the Countryman’s practicality, generous kit levels and decent build quality. In fact, it’s typical MINI through and through; just not in such a MINI-sized package.

When BMW launched its first MINI hatch in 2001, many critics said the car wasn’t worthy of the name because it was no longer a particularly small model. So with 2010’s arrival of the Countryman, those same people must have burst a blood vessel. This car was now the size of a compact SUV, yet it still had the temerity to wear the MINI logo.

However, while many were critical of the Countryman’s size, BMW clearly did something right. The car went on to be a sales success thanks to its engaging drive, neat design and added practicality. Seven years on, and with a new model on sale, how does the Countryman Mk1 rate as a used buy? 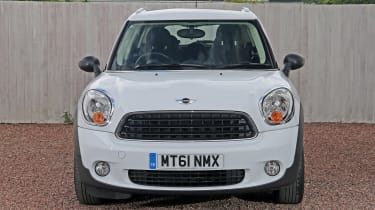 Launched in the UK in September 2010, the MINI Countryman initially came in 98bhp One, 122bhp Cooper and 184bhp Cooper S forms, along with 90bhp One D and 112bhp Cooper D versions. Within six months there was also a 143bhp Cooper SD with 4WD. The Cooper D and Cooper S were also offered with ALL4 four-wheel drive; from June 2013, this was available on the Cooper as well.

The hottest Countryman of all, the John Cooper Works, appeared in September 2012, powered by a 218bhp 1.6-litre turbo with standard four-wheel drive. At the same time, the Countryman range was refreshed with upgraded interior detailing and a standard rear bench seat; two sculpted chairs were a no-cost alternative.

There are no lame ducks in the Countryman range; all of the engines and transmissions are a pleasure to live with, although Steptronic autos are significantly thirstier than their manual equivalents. The One gets air-con, rear parking sensors, powered windows all round, Bluetooth and a DAB radio, but no alloy wheels. 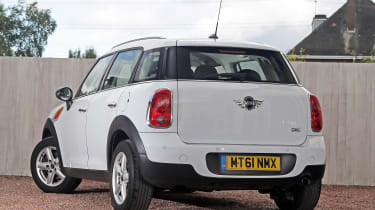 Cooper spec adds alloys, while the Cooper S and SD feature sportier trim but nothing significant in terms of extra kit. The key when buying, though, is to establish what extras are fitted, because a lot of MINIs are specified with option packs. One extra we’d avoid is a set of 19-inch wheels, because these make the ride very harsh.

Alternatives to the MINI Countryman Mk1

Small SUVs have become very popular since the arrival of the Nissan Juke, which was launched at around the same time as the Countryman. Distinctively designed, offered in front or four-wheel-drive forms and with a sporty Nismo option, too, the well priced Juke is widely available on the second-hand market.

Two cars that have both proven to be very popular are the Renault Captur and Peugeot 2008. These don’t come with a four-wheel-drive option, but they do offer plenty of car for your money. Other alternatives you might want to consider for their good value are the Vauxhall Mokka and Ford EcoSport, even though in many other respects they’re rather underwhelming. Supply of both is plentiful.

The reading lights can come on by themselves after the car has been locked, and they then have to be switched off manually. 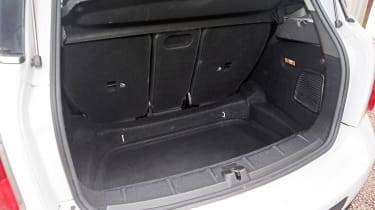 It’s worth holding out for a car that has the optional flat load floor kit; it was a £155 extra. Retro-fitting the kit is possible, but can be costly.

Rattling trim is a far-from-uncommon issue on the MINI, with noises most likely to emanate from the dashboard. However, the door cards can vibrate as well.

The Countryman’s two-tone alloy wheels are prone to corrosion, especially if cleaned regularly with chemicals. Many have been replaced under warranty.

In typical MINI fashion the layout is rather busy, but with familiarity the dash becomes easy to use, while high-quality materials are used throughout. There’s lots of space for four adults, and the rear seat slides for added versatility. The load bay has 350-1,170 litres of space, depending on the configuration. 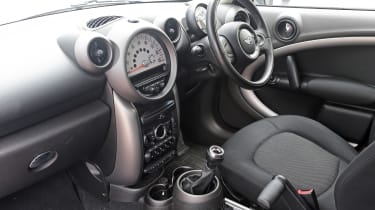 All MINI Countrymans have condition-based (variable) servicing, which normally flags up that maintenance is due after 18,000 miles or two years. Check-ups alternate between minor and major, at £250-£300 and £400-£500 respectively, but most cars have the balance of a tlc pre-paid servicing package. These last for five years/50,000 miles (the initial cost is £299), but can then be topped up by another three years or 30,000 miles for an extra £275.

Longlife coolant is used so there’s no need to replace it, but the brake fluid must be renewed after three years, then every two years, at £64. All engines are chain driven, so there are no timing belts to worry about.

The Countryman has been the subject of two recalls. The first came in January 2012, and affected the Cooper S and JCW with a petrol turbo. A potential short circuit could lead to a fire. Pre-January 2011 cars were called back. 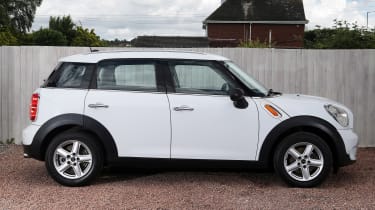 The most recent recall was in August 2013, focused on the Countryman Cooper SD built from August 2010-March 2013, with the 2.0-litre N47T diesel. This time, moisture in a wiring connector for the electric power-assisted steering could lead to a short circuit and potentially a fire.

The last time the Countryman appeared in our Driver Power satisfaction survey was in 2015, ranking 113th. Its highest score was 81st for handling; running costs were 92nd and reliability 97th. The only other top-100 score was 95th for performance; ride and build quality were slated, at 175th and 146th respectively.