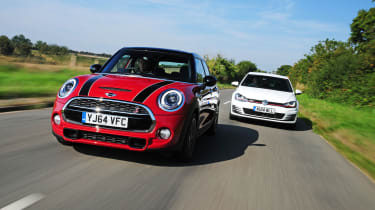 There’s something about the MINI we love – that’s why we made it our Car of the Year. This latest version has taken a sensible pill and rides better than before, but without diluting the thrill factor. It has the rare ability to make every journey fun. In fact, just sitting in it is enjoyable. MINI ownership will make you feel younger, and some people will pay a lot for that. The fact that a Cooper S is so much cheaper than a Golf GTI is the icing on the cake. The GTI remains a supreme hot hatch, but of the two, it’s the MINI’s keys we’d grab first.

What better way to test out the new MINI 5-door's credentials than putting it up against the daddy of all hatchbacks, the Volkswagen Golf?

And when it comes to the king of Golfs, it has to be the Golf GTI – it’s a fine match for the new MINI Cooper S five-door. The Golf is bigger, more powerful and more expensive, but the MINI takes just four-tenths longer to get from 0-62mph, with the manual car posting a time of 6.9 seconds. So which would we rather live with day-to-day? 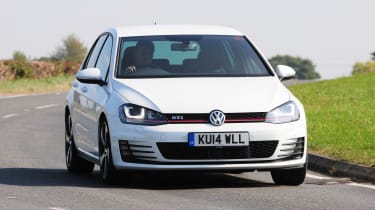 Let’s start in the back, where the differences are surprisingly small. For most people, there’s more than enough space in the back of the MINI. Sure, the Golf is more generous, with space to spare – especially across the back –but you won’t be disappointed by leg or headroom in the MINI.

However, getting in is another matter. Although the MINI’s rear doors open wide, the aperture is narrow, so the Golf is much easier to access. There’s plenty of difference in terms of boot capacities, too – just 261 litres in the MINI compared to 380 litres in the Golf.

Sitting up front highlights the different approaches the two cars take to fun. The Golf is unquestionably smart and functional, but the MINI’s dash is a riot of old-school switches and dials, mixed with the very latest in-car tech. Barely a square millimetre goes to waste, with even MINI’s version of BMW’s iDrive controller squashed between the front seats. In spite of the plethora of controls, the MINI is as easy to use as the Golf, with quality that’s a match for the VW. 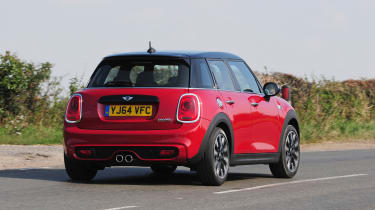 And with a price difference of £7,730 for the respective manual gearbox versions, you’ve got plenty of room to plunder the MINI’s tasty tech on the options list – our car was fitted with £6,000 worth of extras, including head-up display, LED headlights, an auto gearbox and MINI Connected which keeps you in touch with Twitter and Facebook. The Golf comes nicely kitted out as standard with a few choice options available, but the MINI will make gadget lovers happier.

The big question is, though, will it make drivers happier? Both cars use turbocharged 2.0-litre engines, the MINI delivering 191bhp and the VW 217bhp, but bizarrely it’s the British model that feels quicker from point to point.

You sit lower on the road, the steering reacts quicker, while body roll is non-existent. The Golf feels taller through bends, but super quick in a straight line. There’s also less drama about its performance: swift with a hint of a burble from the exhaust. The MINI shouts louder, though – it’ll growl as you accelerate, parp as you go through the gears and pop as you lift off the throttle. The turbo also chimes in, forcing air into the induction system like a hurricane through a letterbox. 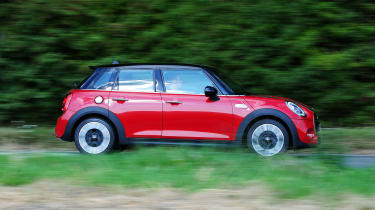 Both cars feel like they want to party, but while the Golf will show you a good time and be tucked up in bed by midnight, the MINI’s off to an all-night rave. If you like your hot hatch full on, then the Brit is the one to go for.

But can it do everyday driving just as well? Both cars ride firmly, yet the MINI will be a revelation for anyone who’s suffered the lumpy, bumpy ride of older versions. The Golf is firm, too, unless you go for the adaptive dampers. But it feels more settled than its rival here, and makes it much easier to forget about poor surfaces.

The Volkswagen’s more sensible side bubbles to the surface when it comes to usability – it wins hands down, as you’d expect the bigger car to do. The Golf will do the job of your sole family car, where the MINI might struggle. But if ultimate boot space isn’t important and rear passengers are happy to compromise, thenthe MINI will suit you just fine.