Special edition MINI Seven offers plenty of additional kit and retro styling, but is it worth the extra money? 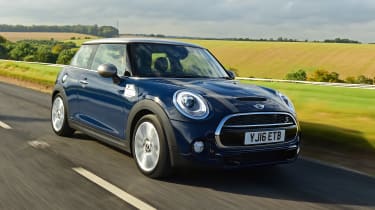 The MINI Seven offers a handful of styling options and some new body colours, plus some badging and extra kit. While it’s hardly a revelation, the MINI Cooper is already a great buy – so you can’t go far wrong with the Seven. The Cooper S is fun to drive, looks good and feels upmarket inside, but the Ford Fiesta ST is still the best value hot supermini on sale.

MINI’s special edition Seven was revealed earlier this year, and promised to be a big seller in the UK thanks to its extra equipment and retro styling. While the Seven is available from £18,545 if you spec an entry-level Cooper, it’s the £21,180 Cooper S we try here for the first time.

The easiest way to spot the Seven is by the Silver roof and door mirrors, as well as the unique 17-inch alloy wheels. You can choose from four exclusive colours, with our car finished in Lapisluxury Blue, while silver bonnet stripes are optional as well. 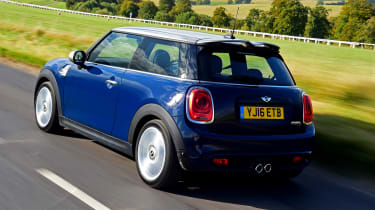 As with much of the MINI range, though, it’s still expensive to buy – especially when you put this Cooper S version next to something like the brilliant Ford Fiesta ST, which costs from just £17,985. But if you really want a MINI, the Seven could make sense. It adds all the equipment you’d need, and thanks to some Seven badges around the car, feels a bit more exclusive than the standard version.

The Cooper S is still great fun to drive, and feels like it was built for UK roads. It’s small and nimble thanks to the direct steering and light body, plus there’s loads of grip. It’s not as fun as the Fiesta, but the MINI is still one of the best-handling superminis on the road. The 189bhp four-cylinder engine is good fun too, with plenty of low-end torque (a peak of 300Nm at 1,250rpm) that helps around town, and a top-end fizz that adds to the fun on a B-road. It’ll do 0-62mph in 6.8 seconds, so it’s got plenty of performance and sounds good, too.

Economy of 49.6mpg and CO2 emissions of 133g/km are impressive for a sporty hatch, and mean that it shouldn’t cost too much to run. Just like the best hot hatches, it provides a good balance between driving fun and everyday usability in that sense. 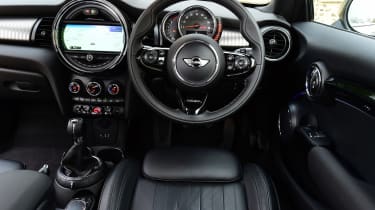 However, like the standard MINI hatch, it does lose out when it comes to practicality. There’s little rear legroom, and adults will find it very tight back there. The 211-litre boot is also very small, with the rival VW Polo getting a 280-litre space. There is a five-door option, however, with that model getting 278 litres of space and a bit more rear legroom, too.

There’s enough space in the front, though, and the comfortable driving position and funky design add to the MINI’s appeal. The circle-themed design isn’t for everyone, but it’s something different and the quality materials used mean it feels more premium inside than a Fiesta ST - although the bucket seats available in that car are more supportive than the MINI’s standard seats.