With a streamlined engine lineup, the X-Trail trades performance for improved economy and lower emissions.

The X-Trail is no entertainer, but it’s easy to drive for such a bulky machine, thanks to light steering, an easy six-speed manual gearbox and a raft of safety tech.

The versatile SUV includes Nissan's ‘Intelligent Trace Control’ which constantly monitors your speed and steering input, adjusting your line through a corner if the car senses you’re going to run wide, rather than cutting in with juddering traction control once the car has lost grip.

Intelligent Ride Control appears, too, using subtle engine braking to reduce oscillations over particularly bumpy roads, or over urban speed humps. However, it’s not enough to disguise a slightly fidgety ride on the larger 19-inch alloys fitted to Tekna models. Models on smaller wheels are fine, but a Mazda CX-5 is more cosseting and the Skoda Kodiaq is sharper, yet just as smooth-riding. 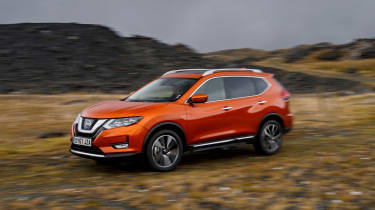 You can now specify your X-Trail with Nissan's ProPILOT semi-autonomous driving technology, which allows the car to steer, accelerate and brake autonomously in a single lane on highways and motorways, both in heavy traffic and at cruising speed on the open road.

The X-Trail doesn't excite or inspire on the road, but offers a reasonable blend of refinement, comfort and agility for such a large machine. Wind and road noise are well isolated, but the diesel engines can make a bit of a din under load.

Tackle a few corners, and you'll soon be aware that the X-Trail has plenty of body roll, while the steering is soft rather than sharp. On the move it’s a comfortable cruiser with a well judged ride, although it’s fidgety at low speeds – finding bumps and lumps in the road around town. All-wheel-drive cars are capable when confronted with a bit of soft-roading, too, and features such as the hill-start assist system are tailored with muddy stuff in mind.

Overall, the X-Trail isn’t as composed as a Peugeot 5008. It’s upset more by bumps and cambers, while the damping means the car reacts more violently to potholes and bumps in the surface – especially at the rear. It’s also neither as responsive nor as rewarding to drive as a Skoda Kodiaq. The Nissan’s steering is nicely weighted, however, and although it leans quite a bit when you push it faster through corners, it doesn’t ever feel unsafe; just a little uncontrolled next to its more composed rivals.

Nissan no longer offers either the 1.6- or 2.0-litre diesel, and the 1.6 DiG-T petrol unit is also off the price list. In pursuit of improved emissions and lower CO2 figures, the range now includes a single 1.7-litre diesel with 148bhp and 340Nm of torque, along with a 1.3-litre petrol delivering 158bhp and 270Nm. Both of these engines are tried and tested elsewhere in the Renault-Nissan Alliance - in the Nissan Qashqai and Renault Kadjar. 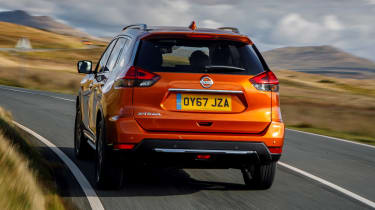 Diesel models are available with front-wheel drive and a six-speed manual gearbox as standard, although there is the option of a CVT auto transmission and all-wheel drive. However, keep in mind that choosing the latter will have quite an impact on economy and emissions figures.

The 1.3-litre four-cylinder petrol is only available with a dual-clutch transmission and front-wheel drive. Swift acceleration requires the engine to be worked hard, although with a 0-62mph time of 11.5 seconds, buyers shouldn't be expecting too much in the way of performance.