On first impressions, the X-Trail makes a great case for itself as a family car. It has decent cabin space and Nissan has effectively consolidated its crossover line-up by offering the X-Trail as a substitute for the old seven-seat Qashqai+2.

However, if you do want that third row of seats, the X-Trail only offers them as a £1,000 option, even on the most expensive model. We’d prefer it if the extra chairs were included as standard at the top of the range, and we'd recommend seriously thinking about whether you'll actually use the seats enough to justify the extra outlay. 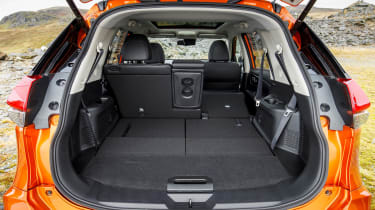 Still, the standard five-seat X-Trail offers lots of appealing practical touches, with unusually wide-opening doors, plenty of storage space, including a compartment with a lid between the seats and a useful glovebox. Then, there’s that generous rear load area.

However, thanks to its updated platform co-developed with Renault which features a 76mm wheelbase stretch versus the last version, the X-Trail offers decent space in the cabin.

The X-Trail has good cabin space, including decent legroom. The rows of seating are arranged in a tiered theatre-style system, where every row sits a little higher than the one in front, so the rearmost seats don't feel as claustrophobic as they could. This doesn’t come at the expense of headroom, though, as there’s plenty of space in the back seats.

The rear doors open outward to almost 80 degrees, aiding access for passengers and for fixing child seats. The optional third row comprises a pair of flat-folding seats, but they are only big enough for children – despite the fact that the middle row slides fore and aft to make more space for the extra passengers or for luggage. There are a trio of seatbelts in the second row, and the outer seats have ISOFIX child seat mounts.

With all seven seats in place the Nissan offers 445 litres of space, while in five-seat form there's 565 litres. Fold both the middle and third rows and you benefit from a huge 1,996-litres. But, while the load space is good, it’s still slightly smaller than the Peugeot 5008 and Skoda Kodiaq can offer. 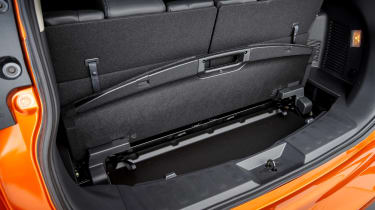 The X-Trail has some very neat practical touches, like a boot floor that moves up and down to create horizontally-separated loading areas – in fact, Nissan claims the versatile X-Trail has 18 different configurations for the load area.

The Nissan X-Trail has different towing capacities depending on which engine and transmission combo you choose, starting at 1,500kg and rising all the way to 2,000kg. Drivers looking for the maximum pulling potential will have to settle for a manual diesel.