Take a passing glance at the Nissan X-Trail and you might initially mistake it for its little brother, the Qashqai. However, while the corporate nose is largely the same as the Qashqai’s, the X-Trail’s rounded rear is significantly different.

The 2017 revisions are recognisable by a new, wider front grille, changes to the bumpers front and rear, chrome side mouldings and an LED daytime running light signature that throws a different pattern to that of the Qashqai - it's easier to spot the difference between the two if the lights are on. There's also a couple of new colours and alloy wheel designs. It's not a dramatic restyle, and if you were a fan of the pre-facelift model chances are you won't be offended by the update, if you even notice the changes. 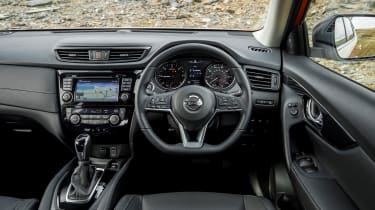 The flagship Tekna spec adds 19-inch wheels, self-parking and powered leather seats to the X-Trail’s lavish kitbag – but by then you’re talking about spending the best part of £33,000.

Owners of the old X-Trail won’t recognise the latest one from the inside, but Qashqai owners will feel right at home. The layout is identical to the Qashqai’s, exhibiting soft-touch materials and good fit-and-finish. However, the Skoda Kodiaq, Mazda CX-5 and a number of other newer rivals offer more modern designs and a greater feeling of quality inside.

As with the facelifted Qashqai, we can’t help feeling that Nissan could have done more with the infotainment and connectivity tech in the updated X-Trail, because rivals have moved the game on.

While the core features offered as part of Nissan’s Connect Evo system are okay (sat-nav, around-view monitor and some other selected app functions, such as Facebook and TripAdvisor), the seven-inch screen isn’t in an ideal position and, most importantly in this class today, the lack of smartphone features compared with its rivals highlights the X-Trail’s relatively limited tech.

Although Apple CarPlay and Android Auto aren’t supported, Bluetooth for calls and audio streaming, as well as DAB, is included with NissanConnect Evo. However, the menu system is clunky and the graphics lack clarity and definition compared with the larger, crisper screens fitted in rivals such as the Peugeot 5008 and Skoda Kodiaq.

At least you get a three-year subscription to Nissan’s live services, which include traffic information.