As the Peugeot 3008 is closely related to the now-discontinued Citroen C4 SpaceTourer, you’d expect its focus to be on comfort. Yet, it doesn’t take long behind the wheel to realise the raised suspension has a negative impact on the ride. The use of the same EMP2 platform has allowed Peugeot’s engineers to improve the 3008’s dynamic ability. It uses MacPherson strut suspension at the front and a torsion beam rear axle, which is standard for the class. However, ultimate performance is less important in this class; efficiency, comfort and practicality arguably carry more weight, and the EMP2 chassis means the 3008 fares strongly across the board.

You immediately feel that the 3008 is softer and more forgiving than firmer rivals; over lumpy ground the chassis soaks up bumps that you tend to feel a little more in some rival SUVs with sportier pretensions.  The long-travel suspension in the Peugeot means it feels composed on all but the worst roads, offering strong refinement and comfort. On the motorway this is particularly evident, and the 3008 is particularly hushed and cruises smoothly when fitted with the quiet 1.2 PureTech turbo petrol engine.

The six-speed manual gearbox in the 3008 is decent, but the small button you need to hold to get it into reverse is a bit of a pain, and the gearchanges aren't as smooth as in some rivals.

Push the Peugeot through a series of corners and its softer focus is evident. There’s more roll, and big steering wheel movements upset the car. The small steering wheel means it feels alert and there’s a useful level of agility on offer, but the steering is fast, so if you’re a little too abrupt it will overload the suspension. Keep the pace slower and the 3008’s comfort is what shines through strongest. 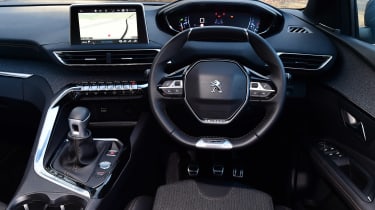 All bar the most powerful hybrid 3008 are front-wheel drive; clearly the car isn’t meant to be a proper off-roader, although most models can be fitted with an optional system called Grip Control. This adds mud and snow tyres and an intelligent traction control system that regulates the power to the front wheels in low-grip conditions. For most people, this will simply make defeating a muddy hill a bit easier, but it’s no match for a proper 4x4 system.

There are two petrol engines, two diesels and two plug-in hybrids in the Peugeot 3008 line-up, with a range of different power outputs.

The line-up starts with the 1.2-litre three-cylinder PureTech 130 petrol, which produces 129bhp and 230Nm of torque, and is available with six-speed manual or eight-speed automatic gearboxes. It’s a great choice, being quiet at low revs and sounding sweet as you get up to speed.

When we tested the 1.2 PureTech against the SEAT Ateca 1.0 TSI, the 3008’s stronger engine delivered a performance advantage. It covered 0-60mph in 10.6 seconds – a tenth quicker than the SEAT – while another 30Nm of torque at 230Nm in total and a 30kg lighter kerbweight meant the 3008 was stronger in gear.

The 3008 accelerated from 50-70mph in sixth in 10 seconds flat – 3.1 seconds up on the Ateca – while in fifth it was 1.4 seconds faster. The margin was closer between 30-50mph in third and fourth, but the Peugeot still had the edge. The six-speed manual’s shift action wasn’t as mechanically precise as the SEAT’s, but compared with Peugeots of the past it’s a much tighter and more pleasing action. 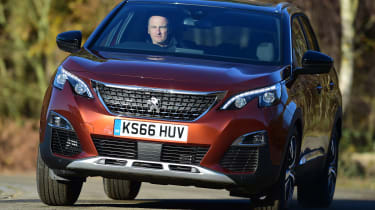 The 1.6-litre petrol comes only with an automatic gearbox and has 179bhp. The result is that it goes from 0-62mph in eight seconds, but it’s not as efficient at the smaller 1.2-litre unit.

Peugeot has also introduced two plug-in hybrid models. The front-wheel drive HYBRID 225 and the all-wheel-drive HYBRID4 300 both use the 179bhp 1.6-litre petrol engine, combined with a single electric motor for the 225 version and dual electric motors for the 300 variant. Performance is improved with 0-62mph achieved in 8.9 and 6.1 seconds respectively.