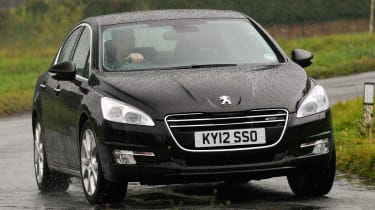 The Peugeot 508 HYbrid4 saloon is an impressive piece of engineering, and you won’t have to pay road tax. However, the batteries encroach into the boot space, the slow gearbox is frustrating and the car’s far from cheap. The standard 508 saloon with 1.6-litre diesel and identical spec returns a claimed 67mpg, has a bigger boot and costs £7,450 less.

So is it a more compelling choice? Both use the same 2.0-litre turbodiesel engine and electric motor, while the saloon produces just 95g/km of CO2, so it dodges road tax and benefits business users, too.

The 508’s steering is nicely weighted and direct, but as in the RXH we tested, the six-speed automated manual gearbox spoils the experience. Take manual control with the shift paddles, and you can smooth out changes with a well timed lift of the throttle. But shifts are jerky in auto, and the box is slow to kick down when you want to overtake.

Once you do find a gear, acceleration is fairly rapid, thanks to 450Nm of torque. However, floor the throttle, and the smooth power delivery quickly turns harsh. Take it easy and refinement is pretty good, and the suspension soaks up bumps with ease.

Power for the front wheels comes from the engine, while the electric motor drives the rears, so you have the safety net of four-wheel drive. Twist the dial to ZEV mode, and the 508 becomes a silent, rear-wheel-drive electric saloon capable of up to 40mph – for a couple of miles at least.

Without the RXH’s body cladding, the 508 looks smart and understated, but we miss the aggressive look of the claw-like LEDs on the RXH. And while the 18-inch alloys are stylish, this doesn’t look or feel like a car which costs £31,450.

The boot floor hides the batteries well, but there’s no room for a spare wheel, which is replaced by a repair kit. There’s 118 litres less boot space than in the standard saloon, at 335 litres, but luggage goes in easily, thanks to a large opening with no lip.

Rear-seat passengers in the 508 will appreciate the absence of a transmission tunnel hump, and those up front benefit from electric leather seats fitted as standard. There’s only one trim level, but it’s well appointed, with dual-zone climate control, Bluetooth, parking sensors and cruise control.