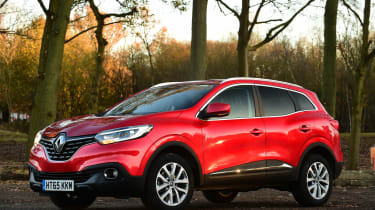 We liked the Kadjar so much when it was launched that we named it our Crossover of the Year. To ensure we’d made the right choice, we then ran one for 10 months and 22,500 miles. Our dCi 110 averaged 52.1mpg and proved an ideal family car, although one or two minor ergonomic and infotainment tweaks would have been welcome. Rounding up our experience, we said: “While newer cars like the Ateca deliver more involving handling, the Renault’s supple ride and low noise levels made it a brilliant companion on typical, everyday journeys when the traffic was heavy or you just wanted to cruise.

When Renault first embraced the SUV market in 2008, its Koleos was a sales disaster. So when the company responded five years later with the much smaller Captur, the only way was up.

Sure enough, the Captur proved a hit and for an encore Renault came up with the Kadjar in 2015, using the Nissan Qashqai’s platform and running gear.

At launch we reckoned the Kadjar eclipsed the Qashqai, but in turn the Renault is now beaten by newer rivals such as the SEAT Ateca and Peugeot 3008. The Kadjar is still a great used buy, but build quality is proving to be an issue for some owners, so make thorough checks before buying. 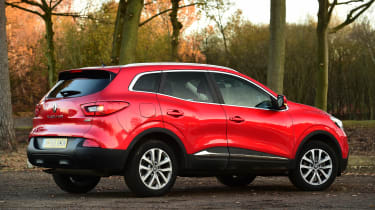 Renault delivered the first Kadjars to dealerships in September 2015. Petrol fans could opt for a 1.2 TCe engine, while diesel buyers could pick from 1.5 dCi or 1.6 dCi powerplants rated at 109bhp and 128bhp. The smaller diesel was offered with manual or dual-clutch automatic boxes, while the larger engine came with front or four-wheel drive.

Two years after the Kadjar’s launch, Renault tweaked the model range with a new 163bhp turbocharged 1.6-litre petrol engine, available only with a six-speed manual gearbox. At the same time, a continuously variable X-tronic automatic transmission was introduced for the front-wheel-drive dCi 130 diesel. 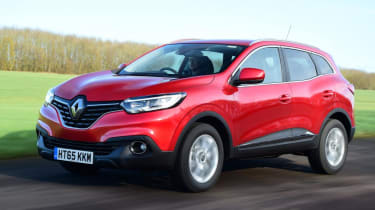 Alternatives to the Renault Kadjar

The Nissan Qashqai is related to the Kadjar, so it’s arguably the closest rival, and a very talented one. The Kia Sportage is also very desirable because it’s well equipped and brings a class-leading warranty; its cousin the Hyundai Tucson isn’t far behind, albeit with a five-year guarantee. The Mazda CX-5 strikes a fine balance of excellent build, sharp looks, top value and a great driving experience – attributes which are generally shared by the Ford Kuga, which is widely available.

If your budget is flexible, take a look at the Volkswagen Tiguan. It’s well made and comes with some excellent engines, but prices are higher than for the Renault.

All Kadjars have a tyre inflation kit. Space saver spare is available, but not on Bose Edition cars.

Excessive wind noise can be due to misaligned doors, a badly fitted screen or a window not fully closing.

The key card can’t be put on to a key ring, but lanyards are available, which attach via a hole in the card.

Generally finished in high-quality materials, the Kadjar’s cabin is conventional yet easy on the eye. It’s comfortable even if you’re tall, and in the back, there’s plenty of head and legroom. The boot serves up plenty of space, too, at 472 litres, or 1,478 litres when the seats are folded. Incidentally, high-spec Kadjars feature an easy-fold rear seat mechanism. 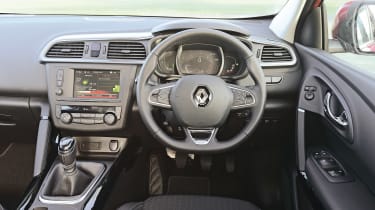 The Kadjar has been recalled four times so far, the first in January 2016 for possible brake servo failure – but not failure of the brakes altogether. Two campaigns came three months later, for side airbag and seatbelt problems respectively. The most recent recall came in September 2017, again because of side airbag glitches.

Ranking 52nd in the top 75 of the Driver Power 2018 satisfaction survey isn’t disastrous, but we’d hoped for better. Highlights were running costs, fuel economy and practicality, while Kadjar owners criticised the infotainment and safety features, plus the reliability and build quality disappointed.