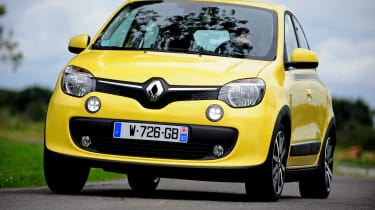 The new Renault Twingo is already making its mark as an agile and attractive city runabout, with a range of economical engines and impressive manoeuvrability thanks to its rear-engined, rear-wheel-drive configuration. While the new six-speed dual-clutch automatic is expensive, it makes the car even more pleasant to drive and a more practical alternative for the mean urban streets.

Smart will call it Twinamic, Renault will call it DCT, but we’ve finally got our hands on the twin-clutch automatic transmission which will be fitted to the brands’ new, jointly developed city cars from this summer.

The previous-generation Smart ForTwo came with an awful automated manual transmission that made occupants nod like dogs at every snail-like change. Luckily, the new Renault Twingo automatic hasn’t inherited it, because there’s a new six-speed twin-clutch box that will be offered in the new ForTwo and ForFour as well.

It doesn’t come from Renault or Smart owner Mercedes, though; in fact, it’s a Getrag unit, already found in Renault’s Megane (albeit with a different casing), as well as the Ford EcoSport and Fiesta, plus some Qoros models. 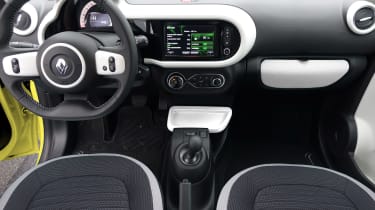 It has six speeds and two dry clutches, and the only evidence of its presence in the Twingo – apart from the absence of a clutch pedal – is the short, stubby, leather-capped lever and the Park, Reverse, Neutral and Drive gate, with manual selection by pushing the lever to one side.

The unit can handle up to 250Nm of torque, and weighs about 63kg. The car we drove was a top-spec Dynamique with 89bhp and 135Nm of torque from its 0.9-litre three-cylinder turbo. We understand from Getrag and Renault that the transmission will also be fitted to the 70bhp 1.0-litre naturally aspirated Twingo.

There are no prices yet, but the same gearbox in a Smart will cost an additional £995, so expect about the same for Renault. That’s a lot of money in a sub-£10,000 car, but as soon as you press the throttle you can feel and hear the improvement over the old automated manual. 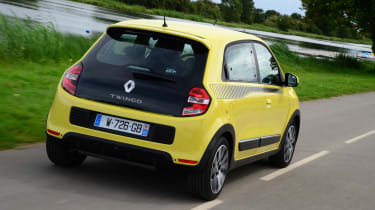 Automatic clutch take-up and pull away is perfectly refined even on an incline, and the gears engage smoothly and quickly. Plus, you don’t have to drive to suit the gearbox as you did in the past; you can keep the throttle pressed and the gearbox software takes control with each gearchange.

Change manually and the unit responds well, engaging the next ratio up or down without noisy jerking or complaint, although in practice, most owners are likely to leave it in auto.