The Ateca uses the same platform and shares the same wheelbase as the Leon hatchback, which means it isn’t one of the most spacious when it comes to rear passenger space.

While the SEAT isn’t the largest car in its class there is around the same amount of space inside as you’ll find in the Qashqai. A Renault Kadjar is slightly larger and offers more room for those seated in the back, but the differences are marginal.

The tall body means there is plenty of headroom, though. The driver’s seat has lots of adjustment and up front the door bins are a good size. Only the glovebox is a little on the small side.

The Ateca is a mid-sized crossover and proportionally it shares the same wheelbase with the Leon but it is taller. It’s almost identical in size to the Qashqai, but the Kadjar is fractionally larger and it shows inside. 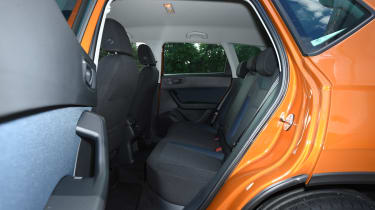 Leg room only slightly larger than what  you get in the Leon hatchback, which means there’s good but not exceptional knee space. The taller crossover body does mean headroom is very good, however. Even the lankiest of adults will be comfortable in the rear.

While rear passenger space may not be as generous as some rivals, the Ateca does have a large boot. In front-wheel drive models luggage capacity is measured at 510 litres, which is considerably more than the Qashqai can offer, although it does concede some usability to the Peugeot 3008. 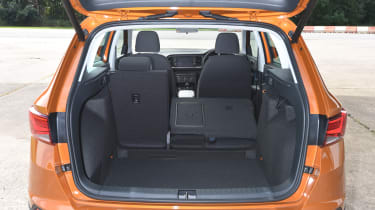 Models fitted with four-wheel drive require a different driveshaft to be fitted beneath the car and that does impact capacity, reducing it to 485 litres. However, that is still more than the Nissan and Renault offer in front-wheel-drive form.

The rear seats also split 60:40 but once flat they do leave a noticeable lip, so loading long or bulky items may be tricky. There is also a shallow but wide storage area hidden beneath the boot floor. Clever features include levers in the boot to fold the seats from the luggage area. Do this and you’ll reveal 1,604 litres of space – 66 litres less than in the Peugeot 3008, but six litres more than in the Nissan Qashqai.

All SEAT Atecas can tow at least 1,500kg, but the maximum braked towing capacity sits at 2,100kg. If you want the most towing power, you are limited to the 187bhp 2.0-litre TDI 4Drive with DSG gearbox. However, there is a 2.0-litre petrol capable of towing 2,000kg of braked mass, should you not wish to go diesel.