Great to drive for an SUV, with good body control and punchy engines

The focus for an SUV is usually on practicality and usability, but the Ateca is also very convincing from behind the wheel. This dynamic set-up for the car is probably down to the fact that SEAT is known as the sporty brand with the VW Group. The Ateca is based on the VW Group’s MQB platform, which underpins everything from SEAT’s new Ibiza supermini to the Audi TT sports car and Skoda’s seven-seat Kodiaq SUV – highlighting the versatility of the modular chassis.

For the Ateca, the ride height has been raised to give it an SUV-like stance, and you feel like you’re sat high. The first thing you notice from climbing behind the wheel is how flexible the driving position is. The is a huge amount of adjustment in the seating position and the steering wheel can be adjusted for reach and height; a driver of nearly any size will be able to get comfortable behind the wheel.

On the move the 148bhp 2.0-litre diesel engine does have a bit of characteristic diesel clatter at lower speeds, but it pulls strongly from low revs and when paired with the seven-speed automatic gearbox it makes for smooth progress. The 1.0 TSI is a better bet, proving plenty punchy enough for most and remarkably refined at high speeds. 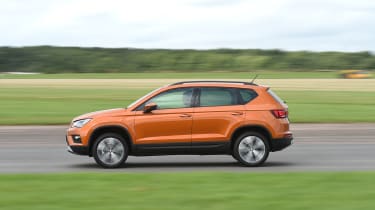 After just a few corners you realise the Ateca is a sportier crossover to drive. Alongside the gearbox, it offers weightier, more precise steering, making the most of the extra grip the MQB chassis provides. However, you pay a price for this engagement and precision when it comes to ride comfort. The SEAT feels firm and it doesn’t float over nasty tarmac or have the compliance of some rivals over rougher roads.

It’s more unyielding, which is transmitted through to the passenger compartment, impacting comfort. Even on the motorway it jiggles and fidgets more than some cars that move with the road a little more harmoniously.

The steering has a nice weighting and a great connection to the road – it’s the best choice if you value driver involvement above all else, but in this class comfort and refinement are likely to be more important.

The Ateca doesn’t hit the heights of the Peugeot here because the firmer set-up means you feel more from the road surface when on the move. It’s not as compliant over country roads, either, and while the SEAT retains good composure thanks to a level of grip that would rival a hatchback, it doesn’t smooth out broken surfaces as adeptly as the 3008.

The noisy 1.6 TDI makes the Ateca less relaxing on a cruise, while the lack of torque only compounds this. You have to work the engine and gearbox harder, revving it more, so the diesel drone is all the more apparent.

Top spec 187bhp Ateca TDI models sprint from 0-62mph in 7.6 seconds, but in reality doesn't feel that fast. If that’s not enough, there is the Cupra Ateca - complete with a Volkswagen Golf R-derived 296bhp 2.0-litre turbocharged petrol engine.

SEAT predicts the most popular choice of engine will be the 148bhp 2.0-litre TDI model, but the 113bhp 1.6-litre diesel engine will also appeal to those who like to keep an eye on running costs. The latter is a little noisy when extended, but it offers enough performance for most needs and rarely feels sluggish. The top-of-the-range 2.0 TDI gets 187bhp and sprints from 0-62mph in just 7.6 seconds.

When we tested the 1.6 TDI it wasn’t as refined as a Peugeot 3008 1.6 BlueHDi or Nissan Qashqai 1.6 dCi. And with only 250Nm of torque (the least of the three), it also wasn’t as quick in gear at the test track. The Ateca took 15 seconds to accelerate between 50-70mph in sixth, although it was faster than the Nissan in the lower gears.

Good traction off the line and a lovely, precise six-speed manual transmission meant the Ateca was actually the fastest car over the 0-60mph benchmark sprint, clocking 10.4 seconds. The gearbox allows you to make up time going up the ratios, whereas you have to be slower and more methodical in the other models.

The petrol engines will serve the needs of some buyers but the availability of the 113bhp 1.0-litre turbo will stand out due to its low list price. The three-cylinder unit isn’t as smooth or quiet as a four-cylinder, but it is eager and pulls well, with the SEAT taking an impressively sprightly 13.1 seconds to accelerate between 50-70mph in sixth. It sprints from 30-50mph in fourth, with a time of 6.4 seconds – while some rivals can't manage that in less than seven.

It’s even pretty quiet on the motorway, and the sharp gearshift and more mechanical feel to the way the SEAT drives means it’s actually very enjoyable to push along twistier roads. If we're honest, this 1.0 TSI is actually our pick of the range. It’s responsive, more refined than the diesels and won’t break the bank to run.

We've also tried the 1.4 TSI (no longer offered on the SEAT Ateca price list) and 2.0 TSI models with the DSG automatic gearbox. Both are relatively swift, but in town the powertrain is jerky and slow to react. It's a shame, because the package is otherwise very tempting. The manual models are much more enjoyable to drive overall.