The Ateca looks great on the outside and has a clean, minimalist interior, although it's a bit bland in places

In the same way it did with the engines and the chassis, SEAT has looked again to its tried and tested Leon when it comes to the exterior and interior of the Ateca. That means smart, clean and well-proportioned looks on the outside, with the usual smattering of rugged body cladding and a raised ride height that typifies an SUV.

The Ateca feels very much like a jacked-up Leon, and this extends to the cabin design, which is carried over almost unchanged from the well finished hatchback. The materials used across the top of the dash are soft and high quality but look lower down on the centre console and the doors and you'll find a few hard and scratchy plastics. It's not a deal-breaker though, especially given the price: The level of quality in the VW Tiguan is better but that's a considerably more expensive car.

SEAT no longer offers the Ateca in basic S trim, so the new entry-level SE version isn't too bad a place to start in terms of standard equipment. It includes 17-inch alloy wheels, an 8.0-inch colour touchscreen, dual-zone climate control, Bluetooth, cruise control and park assist - a self parking function which includes front and rear parking sensors. SEAT's Full Link smartphone connectivity system, which is compatible with Apple CarPlay, Android Auto and MirrorLink, is also available at no extra cost. 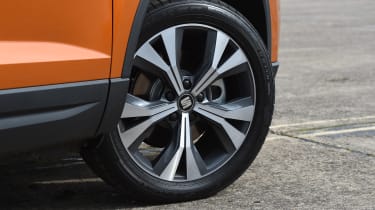 SE Technology cars are priced from around £25,000 and add 18-inch alloys, LED headlights and taillights, a DAB radio, two USB ports and navigation.

The top-spec Xcellence Lux starts from just over £30,000, but for that price you pretty much have everything you could ask for. The interior includes heated leather sports seats, a digital cockpit, a top view camera and wireless phone charger, while other highlights are an electric tailgate, a heated windscreen and adaptive cruise control. Safety kit is also improved with high beam assist, lane assist and blind spot detection as standard. 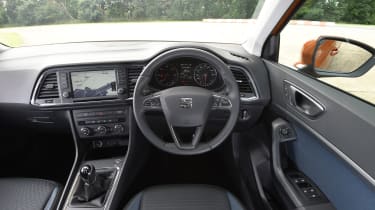 The infotainment system used in the Ateca will be familiar to anyone who has been in a Skoda, VW or SEAT before. The system is very intuitive to use and can be operated by the dials on the dashboard or with the touchscreen itself.

Although the entry-level SE model doesn't have navigation, it does come with SEAT's 8.0-inch colour touchscreen and Full Link smartphone integration, with Apple CarPlay and Android Auto connectivity.

SE Technology adds sat-nav as standard to the Ateca’s infotainment system, but smartphone integration is so good that there’s a case for only using your mobile device’s functions, with apps such as Spotify and Maps supported. DAB and Bluetooth are standard across the range, too.

The SEAT’s touchscreen is easy to use, but the graphics aren’t quite as sharp, so it looks a little grainier. However, it doesn’t ever lag behind your inputs like the Peugeot 3008’s system sometimes does. It’s clearly not as advanced, though, as the Ateca doesn’t get a full digital dash, even as an option, which means it feels a step behind the Peugeot here.

Voice control is standard and works across all areas of the system. It functions fairly well, too, as you don’t have to go through many frustrating procedures to confirm your commands.