The Ateca’s most efficient engines will keep running costs down

The majority of engines available in the SEAT Ateca are adopted from the existing Leon hatchback range. There are six in total: three petrol and three diesel.

The most interesting is the option of the 113bhp 1.0-litre three-cylinder turbo. SEAT claims it will return up to 43.5mpg and emit 147g/km of CO2 on the combined cycle, which isn't bad for such a small engine in a relatively large car. Another petrol option is the larger 148bhp 1.5-litre four-cylinder turbo, which is capable of a maximum 44.1mpg and 145g/km of CO2, while the range-topping (for now) 187bhp car should return 33.6mpg and 190 g/km CO2 emissions. It is worth noting that it only comes as a 4x4 auto – meaning real-world running costs might be higher. 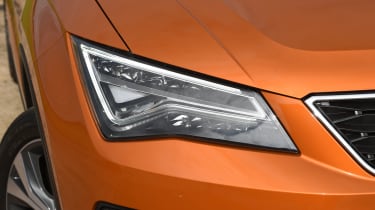 For some buyers, the diesel engines will look more appealing. The 113bhp 1.6-litre diesel will be the most economical model, with SEAT claiming 56.5mpg and 140g/km of CO2 combined. The more powerful and punchy 148bhp 2.0-litre diesel isn’t far behind, however, and will return a claimed 50.4mpg in mixed motoring. The flagship 2.0 TDI 190 (187bhp) returns 40.9mpg with 180g/km CO2 emissions. Again, it's only available with SEAT's 4Drive all-wheel-drive system and the DSG auto box.

Insurance groups for the Ateca start at 10 and rise to 23, which is a similar showing to the Leon hatch. It’s not surprising as they both use a lot of the same mechanical components. Those insurance groups are also comparable to rivals such as the Nissan Qashqai and Renault Kadjar, but none should be too pricey to insure.

No SEAT Ateca is forecast to lose more than about half of its value after three years or 36,000 miles. That's a really strong showing, and proves how in demand these cars are at the moment. According to our data, the two most popular models will be the 1.0 TSI and the 1.6 TDI - both in SE Technology spec. These cars will retain more than 54 per cent of their value, which is more than most rivals.