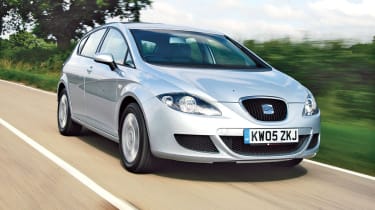 “The best vehicle I have owned. The engine, styling, performance, handling, running costs and looks are all superb. I'd always choose it over a Ford Focus.”

“Now looking to replace this car and I am realising what good value the car is, and the interior quality is as good as some more upmarket rivals.”

“It's a Leon FR - more for going fast than driving fast. The driver involvement is poor and the steering feel non-existent. Other than that it's great.”

“An excellent all-round package. Having previously owned an Audi, I intended to buy an A3 but thought I would have a look at the new SEAT Leon and am I glad I did. Having compared specifications the SEAT won hands down and I saved £4,000 in the process. It even has the same switchgear as any VW or Audi and the same 2.0 T FSI engine.”

“The best vehicle I have ever owned. The engine, styling, performance, handling, running costs, looks, everything about it is superb. Being in the same class as a Ford Focus, I would choose a Leon every time. Ford isn't even in the same league as SEAT for build quality.”

“An attractive family hatchback which stands out from more ‘traditional’ rivals. I expected a better standard of build quality given the VW group connection, however.”

Mid-table mediocrity – it's hardly what SEAT bosses had been hoping for. Last year, the firm slipped three places down the chart, but we were looking on the bright side, expecting a rise in 2007 following the arrival of a raft of new models. Instead the VW-owned marque has dropped another two rungs. With sub-standard ratings across the board, you are finding SEAT ownership a bit underwhelming.