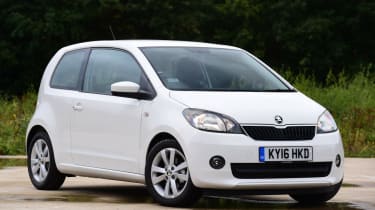 We were so impressed with the Citigo when it arrived that it won our 2012 Car of the Year award, prompting us to proclaim at the time: “How does Skoda do it for the money? “The Citigo is a small car with huge talent. It’s got space for four people, drives superbly, is incredibly efficient and is beautifully built. Then there’s the price and kit list. It’s simply sensational value for money. We love it.” It has proven reliable and, thanks to ongoing demand and keen pricing when new, running costs are minimal even when depreciation is taken into account – which is what any decent city car should be about.

Skoda is best known for offering affordable cars, but until the arrival of the Citigo in 2012, the Volkswagen subsidiary had never produced a city car; its smallest offerings had previously been superminis such as the Fabia, Felicia and Favorit.

When the Citigo was introduced, it shook up the city car segment, along with its SEAT and VW cousins. Smartly designed, great value and good to drive, it’s a typical Skoda through and through, all backed up by one of the best dealer networks in the business.

While 2019 will mark seven years since the model’s debut, it’s had relatively little development. Don’t assume this is a disadvantage over newer rivals, though; some of them are still playing catch-up. 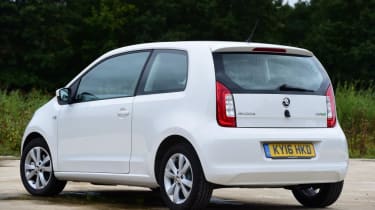 Prices started at £7,630 when the three and five-door Citigo hit the UK in July 2012. Only a 1.0-litre three-cylinder petrol engine was offered, in 59bhp and 74bhp guises, and both were available with a five-speed automated sequential gearbox, called ASG.

At first there were just S, SE and Elegance trims, but a Citigo Sport was added in spring 2013, with suspension lowered by 15mm, 15-inch alloys, privacy glass, a racing stripe down the middle of the car and a bodykit.

The Black Edition special was launched in August 2014, then returned a year later, while the Monte Carlo went on sale in May 2014. A facelift in July 2017 brought design tweaks, integrated multimedia, more safety and comfort options, plus a revised line-up of S, SE, Colour Edition, SE L and Monte Carlo.

The high-powered engine is worth having if you regularly use motorways, but other than that it makes little difference. Three and five- door cars are the same length, but the latter obviously offers easier access to the rear. 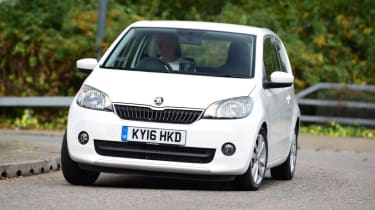 The Black Edition was based on SE spec and added black alloys, a DAB radio and nav, while the Monte Carlo brought black door mirrors and wheels, plus a rear spoiler.

Alternatives to the Skoda Citigo

In effect, the SEAT Mii and Volkswagen up! are the same car as the Citigo, with different badges. They are its closest rivals and just as easy to recommend, while the recently introduced up! GTI is especially fun to drive, even if prices for this diminutive hot hatchback start at £13,000.

The Hyundai i10 and Kia Picanto are tough adversaries with their keen pricing and longer warranties; reliability and build quality are also good. You get strong value, low running costs and smart styling with the Citroen C1, Peugeot 108 and Toyota Aygo, but the trio aren’t as grown-up dynamically.

Another very good alternative is Suzuki’s Celerio, while you could also consider the Renault Twingo and Smart ForFour; this mechanically related pair offer clever packaging and excellent agility.

At first, entry-level S editions weren’t fitted with ESP, although SE models and above did include this safety feature.

The auto is generally reliable and perky, although because it’s an automated manual, check you’re happy with its characteristics when driving. 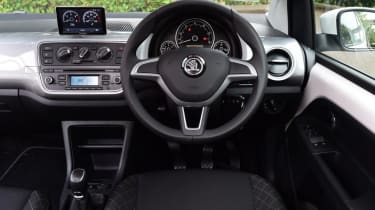 Despite the tiny proportions, the cabin is surprisingly spacious, with decent room for four adults and a 251/959-litre boot. The design is mature and doesn’t feel too cheap, but facelifted cars are noticeably better in this respect. The steering wheel only adjusts for rake and not reach, while entry-level Citigos miss out on a height-adjustable driver’s seat, and don’t feature a rev counter, either.

From a car’s third birthday the maintenance regime moves to a fixed-price menu, with services alternating between minor and major, at £169 and £279.

The brake fluid needs changing after three years, then every two years, at £54. It’s recommended the cambelt is replaced every five years, at £399, although there isn’t a set interval. Various service plans are available, up to the point when a car has covered 120,000 miles. These cost between £19 and £22.50 per month. 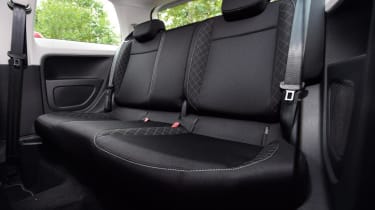 The Citigo has been recalled four times. The first was in May 2013, over faulty airbags. Problems with child locks on five-door cars led to a campaign in July 2016. Two months later, models with a panoramic sunroof built in March and April 2016 were recalled because the roof could detach. The latest action came in December 2017 and covered towing eyes that could fail during use.

The Citigo last appeared in our Driver Power new car survey in 2016, when it came an impressive 11th; it scored poorly for in-car technology (ranking 117th) and performance (92nd). Mid-table scores for comfort and practicality were more encouraging, while top-10 places for reliability, running costs, handling, ride quality and ease of driving all helped to secure that 11th position.