SsangYong Rodius - the worst cars ever

Clearly designed last thing on Friday during a power cut, the SsangYong Rodius is one of the oddest-looking machines of the modern era 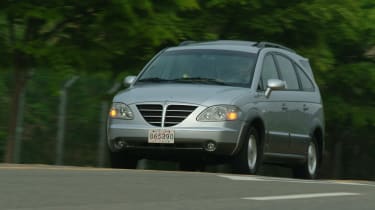 People carriers aren't famed for their stylish good looks, but some cars are more pleasing to the eye than others. At least the Renault Espace had a fairly elegant shape, while the Citroen C4 Picasso proves you can have a spacious car with a futuristic style all of its own. However, the SsangYong Rodius set the bar so low for styling, it's a wonder any were ever sold.

Korean firm SsangYong was in a muddle in the early Noughties. Its ageing line-up of off-roaders was in need of updating, while bosses clearly believed that adding a people carrier to the range would bolster sales. In 2004, the Rodius arrived, and it was almost immediately met with derision.

The styling was the work of Brit Ken Greenley, who also designed some of SsangYong's off-roaders at that time. According to the firm, the design was supposed to take inspiration from luxury yachts, and if you squint, then maybe you can make the similarities out.

From the nose to the back doors, the Rodius looked decidedly average, reminiscent of The Apprentice favourite the Chrysler Grand Voyager from some angles, but it was at the back where it all came undone. The line of the door frame drops dramatically like a coupe, but the roof continues straight to the back of the car. This combination of shapes gave the Rodius a look like it had a shonky extension grafted on the tail, and it put a lot of buyers off.

Things didn't get much better when you were on the move, and further cemented the reputation of the 'Odius Rodius'. Power came from an old 2.7-litre Mercedes diesel, but the Rodius was so heavy that performance and economy were chronic, the soft ride was wallowy and cornering of any description was best avoided. The only redeeming feature of this MPV was the amount of space it offered at a bargain price, which will be even lower second hand.

SsangYong launched a second generation MPV in 2013, but the Rodius name was so tarnished by the first model, that in the UK it gained the Turismo name plate, along with more conventional styling.