We've already tried Toyota's fashionable new crossover in hybrid form, but how does the standard petrol model stack up? 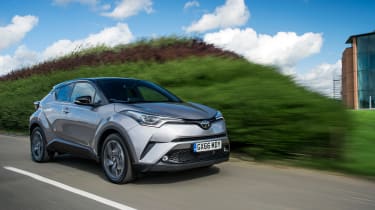 Toyota’s late arrival to the compact SUV market can be largely forgiven with the stylish C-HR. It’s distinctive looks and high-quality cabin complement a surefooted and composed driving experience, while the punchy 1.2 turbo would be our choice over the efficient but flawed hybrid. It’s not cheap in top-spec trim, and lacks the practicality of the SEAT Ateca, yet the C-HR should be near the top of any crossover buyer’s shortlist.

While the compact crossover market has exploded in Europe, most manufacturers have scrambled to launch a competitor to the hugely popular Nissan Qashqai. Toyota, however, has sat aside and taken its time.

Content with the big but unexciting RAV4 SUV for many years, the Japanese carmaker has looked on as more desirable high-riding models have enjoyed sales success. It’ll be watching no longer, however, as the bold new C-HR has finally hit showrooms in time for the new year. 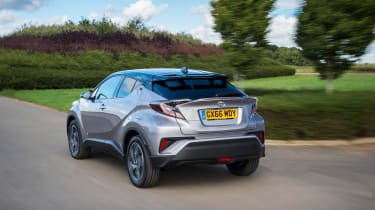 Sitting on the same all-new TNGA platform that underpins the latest Prius, the C-HR is Toyota’s potential cash-cow: the target is for over 100,000 to find homes in Europe over the next 12 months. Around 75 per cent of those will be the hybrid, we tried back in November, while the other 25 per cent will come with the engine we have here; the 1.2-litre turbo petrol.

The C-HR’s engine range is limited, then, with no diesels in the pipeline.  Fortunately, the turbocharged four-cylinder unit looks strong enough on paper to hold its own. With a modest 114bhp and 185Nm of torque it’s not going to excite by any means, yet the C-HR isn’t a particularly heavy crossover to shift weighing in at 1375kg with the slick six-speed manual gearbox – an auto is also available. 0-62mph in 10.9 seconds reflects the need to extend the unit to get the best out of it, yet its mid-range flexibility is strong. 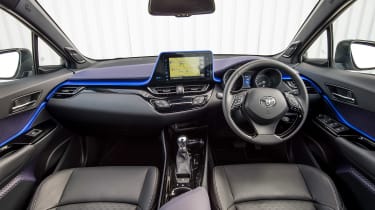 Outright performance is also comparable to the SEAT Ateca’s 1.0 TSI unit., and slightly better than the petrol-electric C-HR.  A claimed combined 47.1mpg is competitive, while the engine never sounds strained - unlike the intrusive hybrid.

In fact, refinement levels are very good all-round. At low revs and when idling you’d hardly know the engine was on, while both wind and road noise is well subdued. What’s more, the lighter powertrain further benefits the Toyota’s surefooted chassis, which has been fine-tuned for European tastes. 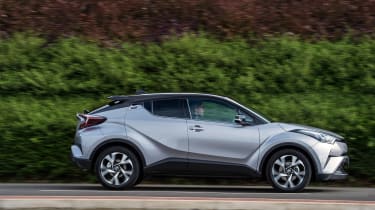 The CH-R will roll if provoked, but direct steering, a surfeit of grip and a feeling of agility make it a more enjoyable steer than most other Toyotas. Combine that with a comfortable and largely well-damped ride and you’ve got a crossover that runs the best in this class close dynamically. Four-wheel drive can also be specced with this engine (albeit purely with the automatic), but on this evidence we wouldn’t bother.

The CH-R also treads new ground for Toyota in terms of interior quality. Gone is the dull design and hard plastics found in the Rav4, replaced by a smart eyes-up dashboard design, liberal soft-touch materials and gloss black trim. Neat touches on our top-spec Excel model include ambient lighting in the cupholders and puddle lights in the door mirrors that project the C-HR’s silhouette onto the pavement. 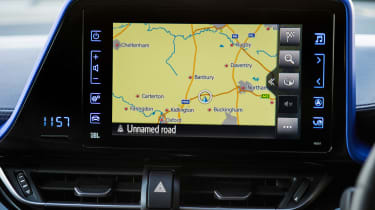 There’s also loads of kit, including sat-nav, keyless entry, heated seats and LED headlamps, although there should be as the C-HR is more expensive than a top-spec 1.2-litre Peugeot 3008.

Practicality isn’t as good as less shapely rivals, either. The 377-litre boot isn’t huge, and while there’s actually a reasonable amount of rear space beneath that sloping roofline the tiny side rear windows make it feel claustrophobic. That’s a shame, but Toyota clearly felt that rear space was worth sacrificing for the C-HR’s head-turning bodywork.