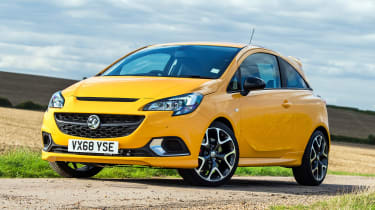 On the surface the new 1.4-litre, 148bhp Vauxhall Corsa GSi looks good. But at £18,995 it is simply too expensive – especially alongside more potent rivals from Ford, Peugeot et al. The driving experience it offers is nowhere near as engaging, either. To be blunt, Vauxhall needs to do better than this to compete at this price point – even if the GSi is cheaper to insure than most of the competition.

As an indirect replacement for the now defunct Corsa VXR, the new 148bhp 1.4-litre ‘GSi’ certainly looks the business from the outside. From a few metres away, and despite featuring one or two smart new detail design touches front and rear, it looks all but identical to the purposeful VXR. It even uses on the same chassis, steering and suspension set-up, says Vauxhall.

So given that its new engine is both cleaner and more efficient than the VXR’s 1.6-litre turbo – and bearing in mind how much less the GSi will cost to insure as a result – this surely makes it a major new contender in the hot hatch class?

The truth is, despite the GSi’s impressive increases in economy and efficiency, it was never going to compete at the same level as its illustrious forebear dynamically, with or without the same chassis and suspension set up. Why? Because it is over 50bhp shy of the VXR and is nowhere near as quick; Vauxhall claims 0-62mph in 8.9 seconds, compared with 6.5 seconds for the old VXR. Top speed is down, too: 128mph versus 143mph. 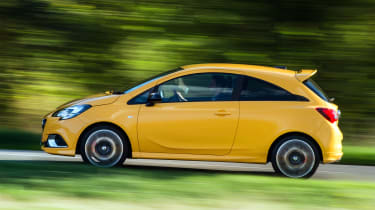 All this would be fine, were this seismic drop in performance accompanied by a corresponding reduction in price. Except it hasn’t been. The basic GSi costs a somewhat baffling £18,995, and if you then add the 18-inch wheels and beefed up seats – virtually the same set you got in the VXR – that price rises to only a few quid shy of £21k. For reference, the VXR cost £18,190 in entry level form, or £20,600 in Performance Pack guise.

And that’s before you even mention the competition on offer from the likes of Ford, Peugeot and RenaultSport. The excellent new Fiesta ST costs from £19,245, but gets a punchy 197bhp 1.6-litre three-cylinder engine, as well as a far more favourable CO2 figure.

Presumably, then, the GSi fights back with an interior specification that far surpasses anything that’s on offer in any of its rivals in terms of connectivity, comfort and space? Not really, no. Yes, you get a good infotainment system as standard, with sat nav and Apple CarPlay, and yes, the quality inside is hard to fault. But there’s nothing here to distinguish the GSi above or beyond its best rivals. In fact, in terms of space it’s one of the least practical small hatches on sale – especially when fitted with the big seats, which make getting in and out of the cramped rear seats more of a palaver than it should be.

But surely the GSi counters all of the above with a piercingly sharp set of dynamic qualities that make it irresistible to drive? Well no, it doesn’t exactly deliver there, either. 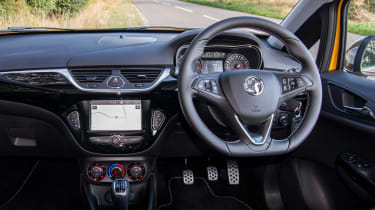 To be honest it’s as removed from the pace in terms of its steering, handling, ride and dynamic engagement, as it is pure speed. Even the six-speed manual gearbox has a rubbery, undefined action to it that is matched, unfortunately, by the strangely numb feel you get through the brake and accelerator pedals.

Grip is very good if you lean on the GSi hard in a corner, and outright stopping power from the new 308mm front brakes is impressive. But even though the engine itself feels perky enough in the mid-range, there’s a curious lack of finesse to the GSi’s dynamic personality that makes it feel a bit clumsy beside its rivals.

The two things it has going for it are its looks and its highly competitive insurance rating. But the rest, frankly, isn’t up to scratch. Not when the GSi’s rivals are so very good.