Strong engines and low weight mean sprightly performance, but there are both more fun and more comfortable alternatives

Under PSA ownership, Vauxhall has been able to access the group’s CMP small car platform. In contrast to the underpinnings of the previous Corsa that dated back to the early 2000’s, the latest architecture is bang up to date. The chassis is both over 15 per cent more rigid than the old car’s and 40kg lighter. Add up the other weight saving measures – lighter seats front and rear, an aluminium bonnet, lighter engines – and the new Corsas weighs up to 108kg less than an equivalent version of the old car.

This brings benefits to the way the Corsa accelerates, brakes and handles, plus how much fuel it uses. Predictably then, the Corsa driving experience takes a giant leap forward.

Around corners it feels agile and responsive, and body control and grip are both strong. It’s not quite as much fun as a Ford Fiesta – the slightly numb steering lets it down a little - but it’s above the class average.

It’s certainly firmer than the previous Corsa, but it’s by no means uncomfortable. The likes of the Renault Clio and the Volkswagen Polo ride more smoothly, but the Corsa isn’t far behind. Refinement was always a Corsa plus-point, but the more rigid body structure means that the cabin is more hushed than ever. 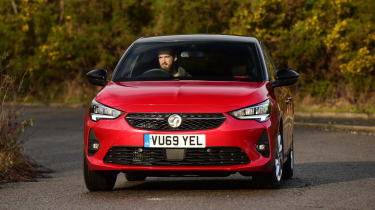 The best news is that in everyday driving the Corsa remains very easy to drive. The steering and the other controls all feel light at low speeds.

In a move which, Peugeot 208 aside, is unique to the supermini class, the Corsa is available with petrol, diesel, and electric powertrains. So regardless of your driving habits, there should be a Corsa for you.

The petrol options use a 1.2-litre three-cylinder that’s available with a turbo (99bhp) or without (74bhp) and these will make the most sense to most buyers. Alternatively, there’s a 1.5-litre diesel with 101bhp and a hefty 250Nm of torque. The entry-level petrol is paired with a five-speed manual gearbox, the diesel gets a six-speed manual, while the most powerful petrol gets a choice of six-speed manual or eight-speed automatic.

Doing away with a conventional transmission altogether is the Corsa-e. Here, drive is taken care of by a 134bhp electric motor, which combined with a 50kWh battery results in a 200-mile-plus zero emission range.

Models higher up in the range – both combustion and electric - are available with a selectable driving mode. By switching to Sport mode, petrol models get an artificial engine note piped into the cabin, plus extra weighing to the steering. Prodding the Sport button in the Corsa-e allows the driver full access to the 134bhp on offer.

The Corsa’s weight saving measures compared to the last one haven’t just resulted in raised performance levels well beyond those of the old car, they’ve shunted the Corsa towards the top of the supermini class.

Even the entry-level 74bhp petrol doesn’t feel out of its depth on the road: officially it’ll cover the 0-62mph dash in 12.4 seconds and go on to a 108mph top speed. The turbocharged petrol offers up 99bhp and 205Nm, and slashes those numbers to 9.3 seconds and 121mph. By contrast, a Volkswagen Polo with just 5bhp less needs 10.8 seconds to get to 62mph, and has a top speed of 115mph. When paired with the eight-speed auto gearbox, the 1.2 petrol’s figures drop slightly, with 0-62mph taking 10.2 seconds and a 119mph top speed.

Turbocharged or not, the 1.2 petrol is a sweet unit. Power delivery is smooth and predictable, and these units only make their presence felt audibly under hard acceleration. Most three-cylinder units are a little thrummy, and this one is no exception - but the cabin and the controls are well insulated against vibrations.

The diesel performs just as impressively. Boasting 101bhp and 250Nm, the 1.5-litre four-cylinder takes 9.6 seconds to accelerate from 0-62mph and has a top speed of 117mph.

As the electric version is the most powerful - the single motor makes 134bhp and 260Nm - it’s also the quickest Corsa. 0-62mph takes just 7.6 seconds, while the instant throttle response means that, particularly at urban speeds, it feels much quicker than that.