The Corsa is comfortable and refined, but below average interior and boot space let the side down

Unlike previous Corsas which were offered with a choice of three and five doors, the latest model comes exclusively in a single five-door body style. Up front, it’s a comfy place to be. The supportive seats have plenty of adjustment, while all round visibility is pretty decent.

Storage is fine, rather than spectacular for the class. The front door bins can each hold a big-ish bottle, while there’s a pair of cupholders in the centre console ahead of a small closed storage bin. The smartphone tray ahead of the gear selector is big enough and positioned in a way that devices shouldn’t fall out when you accelerate or brake. The glovebox is small, though – a result of making it as flat as possible to maximise knee room for the front passenger.

The latest Corsa measures 4,060mm long. That’s 39mm longer than its predecessor, and 7mm longer than a Volkswagen Polo. At 1,765mm wide (not including mirrors) and 1,435mm tall, it’s grown 19mm wider and dropped 44mm lower than before. The wheelbase measures 2,538mm – 13mm less than the Polo. 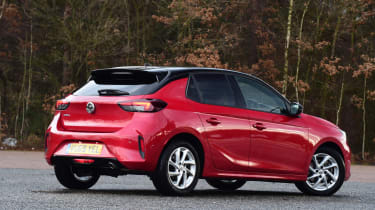 Even before you’ve got in, things start to become a little tricky. The doors’ openings are quite narrow - particularly at the back - which means that it’s not only harder to get in than some rivals, but more difficult to install a child seat.

Once you’ve squeezed through the back doors, things aren’t much better. Compared to rivals like the SEAT Ibiza, Hyundai i20 and even its predecessor to a degree, the Corsa feels cramped. The low roof means that anyone nudging six foot tall will brush their head against the ceiling, while knee room isn’t great either. The seats themselves are comfy, though. 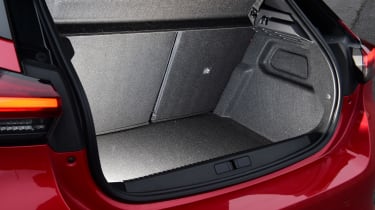 The Corsa’s boot measures 309 litres. That’s 24 litres more than the old car, and 17 more than you get in a Ford Fiesta. However, the Hyundai i20 (326 litres), SEAT Ibiza (355 litres) and particularly the Renault Clio (391 litres) are all much more generous. The opening itself is fairly small, too, with quite a high loading lip to lift heavy items over. The rear seat backs fold in a 60:40 split, but beyond that, the space is short on clever features.