Brilliant fuel consumption figures are possible, but Corsa depreciates faster than some rivals

One of the benefits of PSA’s latest CMP platform is weight – specifically a lack of it. Aided by what Vauxhall claims is class-leading aerodynamic efficiency, the Corsa should offer up some of the best real-world fuel consumption figures in the class.

Based on the WLTP testing procedure, the 74bhp petrol achieves 53.3mpg. The turbocharged version isn't far behind at 52.3mpg. Based on our time with the 99bhp petrol, these numbers seem entirely plausible, depending on the sort of driving you do.

The diesel is more frugal still. Officially, the 1.5-litre, 101bhp unit should be capable of 70.6mpg - a remarkable figure for a non-hybrid car. However, given that it costs roughly £1,200 more than the turbo petrol, it’s only a worthwhile choice for those who will be covering a high mileage. 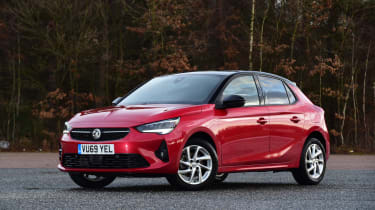 However, the diesel provides the lowest emissions at 109g/km, while the turbo and non-turbo petrol engines both produce 125-126g/km when mated to their respective five- and six-speed manual transmissions. The turbocharged petrol auto version is the most polluting with 134g/km of CO2.

Particulate emissions are kept to a minimum in the diesel thanks to an exhaust system which features a passive oxidation catalyst/NOx absorber, AdBlue tech, and a Diesel Particulate Filter (DPF). Of course, there’s also the fully electric version, the Corsa-e, which emits 0g/km.

The Corsa-e is equipped with a 50kWh lithium-ion battery, which results in a WLTP-certified range of 209 miles. This depends on the driving mode you’ve selected however: the official figure is based on the ‘Normal’ setting, but Sport mode will cause this to decrease (by around 10 per cent, says Vauxhall) while drivers looking to eke out a little extra range can do so in Eco mode.

The Corsa-e can accept rapid charging through a CCS port at up to 100kW. In optimal conditions, this means that charging from zero to 80 percent (about 167 miles of range) takes 30 minutes. Based on a 7.4kW home wallbox, a full charge from empty takes seven-and-a-half hours.

Vauxhall will also throw in a free six-month subscription to BP Chargemaster’s Polar Network, which from then on increases to £7.85 a month.

The Corsa should be a cheap car to insure. Entry-level SE models with the non-turbo engine start in group 10, while the cheapest Turbo model starts in group 16. Diesels start in group 20.

Cars that sell in numbers as vast as the Corsa tend not to be that great at holding onto their value. Combine this with the fact that the Corsa has an asking price that’s higher than the class average, and it means that the Vauxhall is behind some rivals in terms of depreciation.

Depending on the model, the combustion-powered Corsas should retain roughly 37% of their value after three years. The 1.2 Turbo in middling specs is set to hold the most, at closer to 40%.

While the Corsa-e costs the most to buy, it doesn't hold onto any more of its value - 38% on average. Still, as a whole, the Corsa range can’t match the Renault Clio, which holds as much as 46% of its value.